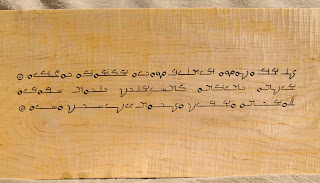 Tim Brookes has been documenting the world's alphabetic heritage by carving specimens on local curly maple in his Endangered Alphabets Project. The website explains his motivation:


Every one of the Endangered Alphabets (Inuktitut, Baybayin, Manchu, Bugis, Bassa Vah, Cherokee, Samaritan, Mandaic, Syriac, Khmer, Pahauh Hmong, Balinese, Tifinagh and Nom), carved and painted into a slab of Vermont curly maple, challenges our assumptions about language, about beauty, about the fascinating interplay between function and grace that takes place when we invent symbols for the sounds we speak, and when we put a word on a page—or a piece of bamboo, or a palm leaf.


The text in each case is Article One of the Universal Declaration of Human Rights. Brookes chose these alphabets because:


Writing has become so dominated by a small number of global cultures that those 6,000-7,000 languages are written in fewer than 100 alphabets. Moreover, at least a third of the world’s remaining alphabets are endangered–-no longer taught in schools, no longer used for commerce or government, understood only by a few elders, restricted to a few monasteries or used only in ceremonial documents, magic spells, or secret love letters.


The Atlantic, in describing his work, commented: "Letters in carved wood filled with black enamel paint ... make everything sharper and convey something of the awe of ancient inscriptions." Brookes art should certainly serve the purpose of relics, which is to contain and preserve things of great value, in this case, alphabets.