Illuminated Bibles in the 21st Century (2)

This summer, I had the opportunity to spend several days at St. John’s Abbey in Collegeville, MN. I went there to see the St. John’s Bible, an ongoing project to produce the first Bible in many centuries to be completely hand-written and illuminated by professional calligraphers. St John’s Abbey sponsors the project though the actual work is being carried out in Wales by a team of calligraphers led by Donald Jackson.

Four of the seven volumes have now been finished and are on sale in facsimile reproductions. The SJB’s illuminations are distinctive in content and contain a mix of styles by different artists, sometimes together in one illustration. They range from highly illustrative medleys (such as the distinctively African Garden of Eden scene) through atmospheric evocations of mood (such as the incipits for Proverbs and Ecclesiastes) to visual celebrations of textuality (such as the Ten Commandments illumination or the incipit of Matthew that casts Jesus’ genealogy in the form of a menorah). Like the text (which is modern English, the NRSV translation), the illumination art takes mostly modern form while consciously evoking many of the conventions of medieval illuminated manuscripts, such as text emphasized by color, marginal animals (often insects painted very realistically), as well as the style of the hand written letters themselves.

The original pages, however, have not yet been bound together as books. This allows their many illuminated pages to be displayed in traveling exhibitions, as well as at St. John’s. Almost a dozen pages from the newest volume, Wisdom Literature, were on display this summer. The manuscript pages are very striking—more so than the full-size reproduced facsimiles available for sale, as I was able to tell because I could compare them nearly side-by-side in this display. Displayed in museum cases, these manuscript pages work exactly like icons to draw attention to a transcendent reality—in this case, the biblical text itself. Viewing the illuminations made me refer to the text and want to re-read passages again.

St. John’s has produced a bible that combines the qualities of original art, icon and reproducible book—a form that draws attention to unique original in order to generate interest in its limitless reproductions. Its old-fashioned form—hand-written and illuminated parchment—works well to grab attention in the art museum culture of the twenty-first century.
Labels: Bible, exhibits, illuminated texts, sales, scribes
Email ThisBlogThis!Share to TwitterShare to FacebookShare to Pinterest
2 comments: 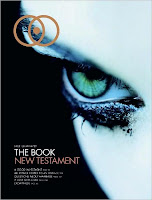 Though the look and feel of The Book: New Testament amply fulfills my expectations of the aesthetic and production values that an ad executive brings to Bible publishing, the title of the two-volume series, The Bible Illuminated, places the work within a very old tradition. Once you start looking for it, the heritage of medieval illuminated manuscripts can be recognized in various ways, such as the use of incipit pages and the use of boxed verses or yellow highlights for emphases. Despite appearances, then, the The Book: New Testament does not attempt a radical aesthetic innovation in bible publishing but rather consciously updates an ancient and venerable tradition with new production values and methods.
Labels: Bible, illuminated texts, media, sales
Email ThisBlogThis!Share to TwitterShare to FacebookShare to Pinterest
1 comment: