Books on On the Media 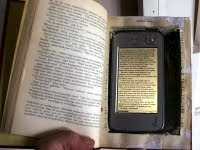 This weekend's broadcast of NPR's On The Media was devoted to the contemporary book "crisis", with segments on the book industry ("Book It"), authorship and publishing ("Indies on the Industry," "Books 2.0"), book formats ("For the Love of Reading," "For the Love of Books"), and "Books that Die."
An urgent and emotional issue for many!
Labels: bookstore, disposal, ebooks, materiality, media, reading
Email ThisBlogThis!Share to TwitterShare to FacebookShare to Pinterest
No comments:

Movie out of Book

Posted by Jim Watts
The New Zealand Book Council has developed a video that literaly makes a movie out of a book:

Posted by Jim Watts
I have long complained that digital media shows no promise for long term preservation of texts and other data. Milleniata is now marketing a DVD that actually etches data the disk and is readable in a standard drive.

But even if this proves to be a permanent storage medium for digital data, it doesn't address the problem of cultural obsolescence, as Alexander Rose points out on the Long Now Blog:

They really need some sort of marking on the tops of all the blank media that explains what the DVD data standard is and how to read it. Otherwise in a 100 years, I can't imagine that many people will remember…

Posted by Jim Watts
A new article explains the origins of book veneration in Mahayana Buddhism. Will Tuladhar-Douglas points out that early Buddhism featured two institutions to preserve the Buddha’s oral teachings on the one hand and to preserve and venerate his relics on the other. The invention of written sutras produced an artifact that functioned as both teaching and relic simultaneously. Therefore reading aloud and written reproduction of the sutras was valued just for the sake reproducing it, as in oral transmission, while the sutra itself was venerated as an important relic. An early (2nd-4th centuries C.E.) text in the Prajnaparamita tradition depicts a sutra on a throne on a glorious stupa being venerated by the gods themselves:

Moreover, at that time the great Bodhisattva Dharmodgata caused a peaked shrine to be built from seven (kinds of) jewels, decorated with copper and sandalwood, draped with strings of pearls. At each of its four corners he had lamps fashioned from single rubies set. On each of the four sides were silver censers facing each of the four directions, in which pure krsnaguru (Vepris bilocularis) incense was burnt to worship the Prajnaparamita. In the middle of this shrine was set a seat (parmika) made from seven jewels; and on the seat was a casket (peca) made from four jewels. The Prajnaparamita, written on leaves of gold coated with lapis lazuli, had been placed inside this. The peaked shrine was decorated with hanging banners and garlands of many colours. (V 249-50.4) Now Sadliprarudita, the merchant's daughter and her five hundred attendants saw the peaked shrine laden with countless arrays of offerings. They saw hundreds of godlings, with Indra chief of the gods, scattering and showering and festooning the peaked shrine with sacred mandarava flowers, sandalwood, gold dust and silver dust. They heard divine hymns. (V 250.5-9) 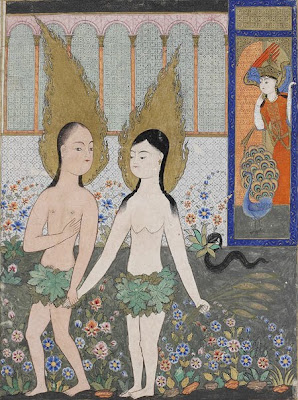 Douglas Galbi provides a review of the Sackler Gallery's exhibit, Falnama: Book of Omens. The Gallery's website describes the exhibit:

Whether by consulting the position of the planets, casting horoscopes, or interpreting dreams, the art of divination was widely practiced throughout the Islamic world. The most splendid tools ever devised to foretell the future were illustrated texts known as the Falnama (Book of omens). Notable for their monumental size, brilliantly painted compositions, and unusual subject matter, the manuscripts, created in Safavid Iran and Ottoman Turkey in the sixteenth and early seventeenth centuries, are the center piece ... of the exhibition [which] comprises more than sixty works of art from international public and private collections.

The construction of the books prioritizes seeing. Like the Hamzanama of Akbar, these monumental Falnamas have large images framed to form complete pages. The books open to an image on the right page and text on the left page. Since reading in Persian and Turkish progresses from right to left, the image is read before the text. Visually, the images are colorful and ornate. The texts on the facing pages are also highly decorative. At least with these books, taking an augury was an impressive sight.

He argues that the books were probably be used by ruling elites to read omens for common people:

Recognizing the augury texts to be bureaucratic work suggests that the monumental Falnamas were for elite use, but not for elite reading. These Falnamas obviously are lavish, expensive works. ... The Falnamas seem to me to make most sense as a tool for an elite's bureaucracy to provide auguries for ordinary persons who seek them from the elite person.

The exhibit will be at the Sackler Gallery in Washington, D.C., until January 24th.
Labels: illuminated texts, Muslims, omens
Email ThisBlogThis!Share to TwitterShare to FacebookShare to Pinterest
No comments:

Posted by Jim Watts
David Dault has launched a blog devoted to Material Scripture. In concious dialogue with but differentiation from the "scriptural reasoning" movement, Dault aims to evaluate the diverse physical forms of modern Bibles theologically.

This blog explores the physical forms that Scripture takes, as it is presented to readers in various iterations as a printed artifact. Thus the phrase, "Material Scripture," describes a practice of inquiry that seeks to examine the culture of mass-market Bibles in North America by analyzing the Bibles themselves.

I look forward to seeing how the study of material scriptures and iconic books interact and inform each other.
Labels: Bible, book history, Christians, sales
Email ThisBlogThis!Share to TwitterShare to FacebookShare to Pinterest
No comments:

The Institute for Signifying Scriptures has posted online a synopsis of the three day conference, "Reading Scriptures, Reading America." The heart of the meeting consisted of reports by five different working groups studying scripture reading practices in different ethnic communities in the U.S. This conference and the work of the institute as a whole emphasizes the importance of power relations to understanding scripture reading practices. That is an important reminder for studies of iconic books as well.
Labels: Bible, conferences, legitimacy (ethos), politics, Quran, reading, research
Email ThisBlogThis!Share to TwitterShare to FacebookShare to Pinterest
No comments:

Dutch artist, Sanja Medic, created this building facade in 2006 out of tiles that represent specific books. She notes that the building thus reflects its neighborhood, whose streets are named for well-known 18th and 19th century writers. 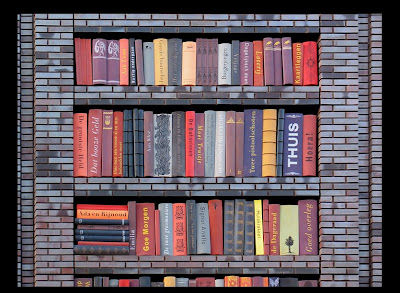