Posted by Jim Watts
Labels: libraries
Email ThisBlogThis!Share to TwitterShare to FacebookShare to Pinterest
No comments:

Posted by Jim Watts
Though I share the Bibliophile Bullpen’s skepticism about Microsoft’s repeated claims that e-media will soon replace print media, the ancient historian in me has to take issue with her assertion that “PRINT is the longest lived media humanity has managed to create.”

Leaving aside media such as stones and metals too expensive for anything but monumental or ritual use, the honor for most durable written media must go to the clay tablet—the chief carrier of cuneiform script and the literatures of Mesopotamian and surrounding cultures for more than 2,000 years. Though easily broken, a fired ceramic tablet is otherwise virtually immune to the ravages of time. As a result, more documentation of daily life in second and first millennium B.C.E. Mesopotamia has survived than of most subsequent cultures who switched to using ink on parchment or papyrus, which were more convenient but much less durable.

In fact, changes in written media over the five-thousand-year history of writing have always tended towards greater impermanence. From clay tablets to parchment to papyrus (admittedly in use in Egypt as early as cuneiform tablets in Mesopotamia) to rag paper to wood-pulp paper and now to electronic media, the materials have become easier to use but less and less permanent.

Nevertheless, complaints about electronic media’s impermanence and mutability points to an important aspect of the book’s iconic status: texts are supposed to preserve their contents for the future. They represent an author’s hopes for immortality, a nation’s desire for permanence, a religion’s claim to eternal truth. Conscious of our heritage from previous generations, we cherish old texts as relics that connect us to the past. Conscious of our own mortality, we hope that “our” books will live on indefinitely.

The traditional codex makes that realistically possible and verifiably true of many texts. Electronic media show no sign of being able to offer the same hope.
Labels: ebooks, media, memory, preservation, relics, technology
Email ThisBlogThis!Share to TwitterShare to FacebookShare to Pinterest
2 comments:

What should you do with old or damaged Bibles you no longer need? Michigan-based Christian Resources International (CRI) suggests several ways to put them to use. Operation Bare Your Bookshelf allows you to send used Bibles in good condition to people who need them overseas.

CRI is responding to what seems to be a widely felt need, at least as evidenced by the remarkable number of websites providing advice on disposing of Bibles: Wikihow, Answerbag, Everything2, Yahoo, Allexperts, Ehow, and Catholic Forum. Since unlike Jewish, Muslim and Sikh traditions, Christian denominations for the most part have no prescribed teachings on Bible disposal, this wide-spread concern may be produced by the obvious, if usually implicit, analogy between Christianity's iconic book and other sacred objects and/or by the influence of prominent media stories about controversies over the treatment of scriptures of other religious traditions.
Labels: Bible, disposal
Email ThisBlogThis!Share to TwitterShare to FacebookShare to Pinterest
3 comments:

Kindle: Smoldering in the Uncanny Valley?

Posted by Jim Watts
Brian Cassidy on Book Patrol wonders if the Kindle e-book reader is too good to be readily acceptible:

Perhaps some of the resistance among bookaholics to e-readers such as the Kindle was due in part to a kind of biblio-version of The Uncanny Valley:

The uncanny valley is a hypothesis that when robots and other facsimiles of humans look and act almost, but not entirely, like actual humans, it causes a response of revulsion among human observers. (Wikipedia)

Is the Kindle - in the words of this classic bit from 30 Rock - just a bit too much "Tom Hanks in Polar Express" and not enough "R2-D2"?

On this blog, we might rephrase this observation to wonder: will resistence to e-books increase, rather than decrease, the more they assume an iconic book's form? Our observations to date suggest that it will depend on the kind of book in question, and to what extent the e-application might be perceived as endangering its iconic status (or possibly even enhancing it).
Labels: ebooks, technology
Email ThisBlogThis!Share to TwitterShare to FacebookShare to Pinterest
No comments:

iTouch in a Book 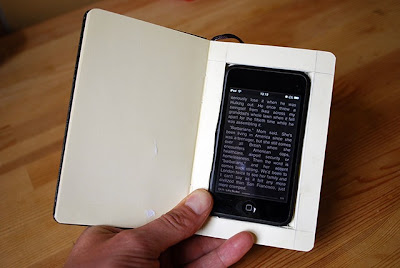 Charlie Sorrell on Wired explains and shows how to make an iPod Touch look and feel like "a real book." He explains his motive:

Imagine seeing an attractive girl (or boy) sitting outside a pavement café, drinking an espresso, smoking a Gauloise and reading a tatty paperback. It's a romantic image which is shattered when you swap the book for a PDA. I decided to disguise my iPod as a book, and if that wasn't pretentious enough, I put it in a modded Moleskine, the notebook of choice for fops and dandies the world over.

Chris Meade on if:book describes this as "Stationary fetishism and gadget love meet in perfect union." It could equally well be described as "Gadget fetishism meets stationary love." As always when it comes to books and technology, it's all in the eye of the beholder. The question is, are the eyes of most beholders changing as rapidly as the technology? The evidence for the continuing iconicity of books suggests not ...
Labels: ebooks, technology
Email ThisBlogThis!Share to TwitterShare to FacebookShare to Pinterest
No comments:

Doctor Who Among the Books

Chris Meade on if:book points out that "Doctor Who, Britain's favourite time traveller, is trapped on a gigantic planet-sized library on BBC 1 this week. Electronic librarians oversee rows of very conventional looking dusty tomes and death lurks in the shadows. The Doctor has already told us how, despite all the advances in technology, future life forms still love nothing better than the smell and feel of a proper old book."
Labels: libraries
Email ThisBlogThis!Share to TwitterShare to FacebookShare to Pinterest
No comments:

Our Danish printed, European imported books are sold specifically with interior design in mind. Many people feel that it's silly to purchase books for pure decorative value. While we certainly understand this, we also savor the opportunity to change the mind of such individuals! Our books are so beautiful on the outside that their interior ceases to be important. What's more, they are available for purchase by the foot as well as the yard. In other words, no more spending hours in used bookstores looking for space fillers. At Book Décor, this process takes a matter of seconds!

Lieberman points out that Book Decor is not the first to aim at this market: the Strand bookstore in New York has sold decorator collections of books by the foot for years.
Labels: display, sales
Email ThisBlogThis!Share to TwitterShare to FacebookShare to Pinterest
No comments: