Posted by Jim Watts
On a different from of material media: The Guardian reported that income from sales of vinyl records outpaced sales of digital music in Britain in the first week of December this year. Of particular interest to readers of this blog is the comment by Kim Bayley, chief executive of the Entertainment Retailers Association, that young people

Posted by Jim Watts
The New York Times recently asked seven authors to write about their favorite bookstores. The article enhances the iconicity of both authors and bookstores in each other's reflection, while ignoring their economic relationship as producers and marketers of a product...
The Times alos encourages more bookstore nostalgia with its photo essay on Livrario Lello. Back in the summer, it focused on legends about the local landmark, the Strand Bookstore.
Meanwhile, the Guardian tries to take advantage of a popular internet trend with its pictures of "the most beautiful libraries in America."
Labels: bookstore, libraries
Email ThisBlogThis!Share to TwitterShare to FacebookShare to Pinterest
No comments:

Posted by Jim Watts
The Governor of Kentucky has declared 2017 a Year of the Bible to promote congregational and community events to read aloud the Bible through from January 1st through 4th.
Labels: performance, politics, reading
Email ThisBlogThis!Share to TwitterShare to FacebookShare to Pinterest
No comments:

In language strikingly reminiscent of Jim Watts, Christopher de Hamel, medieval librarian at Cambridge University, discusses the ways books are, and are not, like relics.

Medieval illuminated manuscripts are the holy relics of our own time. They are often preserved, like sacred treasure of the middle ages, in special boxes in institutional strong-rooms and brought out only on special occasions for the edification of the public, displayed in the half-dark under layers of security glass. Unlike most works of art only small portions of any manuscript can be seen at once. What remains unseen merely adds to the mystery and the longing to turn the pages. As with most medieval relics, which are generally tiny fragments of something once much larger, engagement with illuminated manuscripts on public show usually requires great leaps of both imagination and faith.

Read on at The Guardian...

Tactics for Teaching the Materiality of Scripture

The journal, Teaching Theology and Religion, has published a set of "Teaching Tactics" for introducing students to the materiality of scripture.

Song-Chong Lee describes a week-long assignment in which students write and ritualize their own gohonzon scroll to learn about Soka Gakkai.

Sarah Schwartz describes a course-long series of experiences that lead her students from calligraphy to printing to memorized recitation.

In his introductory essay, Brent Plate notes that "the contributors are not merely concerned with reconstructing what some “original” community might have done with the text, but what the classroom communities can do with a text, and how we might reflect back on our own learning experiences. ... students are challenged to become aware of the sensorial nature of sacred texts, and of communication itself. They touch, see, and hear in new ways, learning with their bodies."
Labels: materiality, performance, teaching
Email ThisBlogThis!Share to TwitterShare to FacebookShare to Pinterest
No comments:

The Bathroom Wars of North Carolina continue on.

Raw Story posted this piece, with clickable headlines about the "angry bible-waving" mother of 12, screaming questions to Target customers like "Are you gonna let the devil rape your children?"

The video to which it referred is a great example of "performative texts." If you care to watch the clip, you'll hear the woman screaming a lot of what basically amounts to nonsense, with family in tow, but note how there's really nothing "biblical" in her soliloquy (if I might be excused such a term to describe what's going on here). She doesn't quote scripture, nor does she really even claim anything particularly "Christian" (reference to the devil aside).

What she does do is firmly hold high a bible. The camerawork shows the set up here: in the first two seconds the family is stopped, as they are just getting the protest going. As soon as they begin walking she raises the book up in the air. It stands as a visible beacon that guides them, not unlike a tour guide in NYC with a red umbrella. But the bible is never mentioned, never quoted from, never used for anything other than a visual display of some, unknown, power.

The library of Admont Stift as reliquery

On January 5, 2016, I visited the rococo library of Admont Stift.

The Benedictine monastery, Admont Stift, was founded in the 11th century in a wide valley in the Austrian alps. Today it claims to be the largest monastic establishment in Austria, including considerable land holdings and businesses including a winery and apothecary. Its buildings appear relatively modern, due to a devastating fire in 1865 that required almost complete rebuilding, and its prosperity is evident from its up-to-date facilities for visitors.

The baroque library of Admont Stift survived the nineteenth-century fire intact. Its large hall claims to be the longest of any monastery library worldwide, and its shelves hold 70,000 volumes. 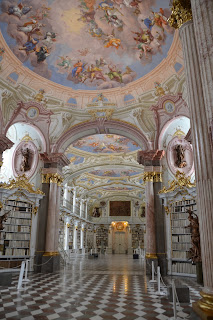 It was finished in 1776 and its white paint, floral decorations and ceiling frescoes reflect the rococo style of the period. The frescoes’ subjects depict the uniting of scientific, humanistic and religious learning and reflect eighteenth century enlightenment thought with an authoritarian Hapsburg orientation. The library was recently refurbished and looks like new.

From the extensive facilities for visitors, including up-to-date ticket counters, restrooms, parking lots, and restaurant, it appears that the library attracts many tourists. They are encouraged by the single admission price to also visit the art and natural history museums in the same building. The art collection gives a quick review of changes in artistic styles from medieval through renaissance and baroque to rococo, before focusing on the monastery’s ecclesiastical treasures: reliquaries, vestments, chalices, etc.

The natural history museum is more extensive. It proves to be a deliberate reproduction of a “cabinet of curiosities.” The monastery had extensive collections that perished in the 1865 fire. The monks subsequently rebuilt a remarkable collection of stuffed or pickled wild-life, pinned insects, botanical specimens and minerals. One room presents a multi-media and child-friendly introduction to the local natural environment. But most of the museum preserves an older approach that emphasizes cataloguing and comparing species.

The museums of natural history and art join with the library in projecting the Benedictine ideal of the pursuit of learning, all learning, as a devotional ideal. The library shelves secular subjects in the south end and theological subjects in its north end, while saving the central rotunda for scripture and its ancient interpretation. The museums, then, extend this vision of universal scholarship centered around scripture to include artifacts and specimens.

But whereas the museum’s architecture and decoration is entirely functional, the library’s is quite the opposite: most would agree that rococo style is as far from functional as one can possibly get. Why the contrast?

A clue can be found in reliquaries displayed in the monastery’s art museum. Many here are made of gold and silver and decorated with jewels. All this to display and preserve small bodily relics—a piece of bone or hair or cloth. A reliquary proclaims the extraordinary significance of the apparently mundane objects it contains. The most elaborate in the Admont Stift treasury is a “monstrance” for displaying the host—the wheat wafer transformed by a priest’s blessing into the body of Christ and presented to congregants during Catholic Mass. A thin wheat wafer would be placed inside this gilded stand decorated with 2,175 gemstones to emphasize the superlative value of the host.

The rococo monastery library functions like the monstrance to proclaim the superlative value of its contents—in this case, of its books. By the eighteenth century, books had become common objects. Against the tendency to think of them as mundane, the rococo library encases them in rich art and decoration to show every visitor the importance of its contents. The library is a reliquary that emphasizes the treasure of religious, cultural and scientific knowledge.

I am hosting a symposium on the theme, "Seeing, Touching, Holding and Tasting Sacred Texts," this Thursday and Friday in Bochum, Germany. The symposium is part of the research of the Käte Hamburger Kolleg at the Center for Religious Studies of Ruhr University Bochum. This year's research theme is "religion and the senses."

The symposium includes the following presentations:

Labels: conferences, senses
Email ThisBlogThis!Share to TwitterShare to FacebookShare to Pinterest
No comments: 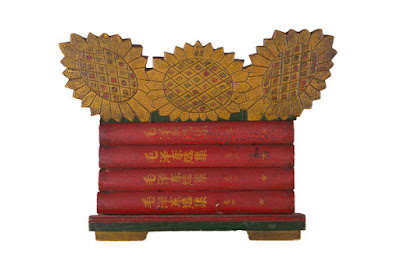