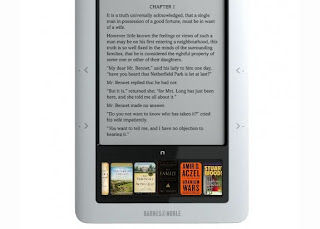 Barnes & Noble's new e-reader, the Nook, is being launched together with covers that, in some cases, clearly aim to make it look more "bookish." This one in particular gives the virtual text a very material, and artistic, binding. 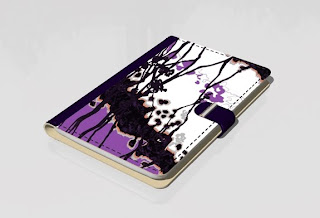 Weird Testament: The Bible Gets the R. Crumb Treatment

Posted by Unknown
I've been waiting for Crumb's "Genesis" to come out and thinking about teaching it next semester to my "Pop Culture/Pop Religion" course. He's not the only one who has put parts of the Bible in comic form (as McKee notes in this good write up), but what Crumb does do is raise the prickles between words and images. I'm a fan of his drawing skills and styles, but the almost "literalism" he uses here makes one wonder again whether all of this must remain literary.

Posted by Jim Watts
SHARP’s annual journal arrived in the mail recently. It includes an article that should be of great interest to follower’s of this blog: Jeffrey Todd Knight’s “‘Furnished’ for Action: Renaissance Books as Furniture,” Book History 12 (2009), 37-73. He discusses

a set of practices, still operative but generally devalued in modern textual culture, that involve making books useful as material objects or artifacts, not just for reading or owning for their ideational content alone. The “use” of books in the era of early print has recently become a topic of substantial interest of both historians of reading and scholars interested in the materiality of literary works; but conceptions of utility, I would like to suggest, remain largely bound to modern categories, making room enough for texts but little for textual objects [38].

In the Renaissance, these practices included using books as filing cabinets in which to store or write legal documents, recipes, and the like; making desks and beds out of stacks of books; and conversely regarding furniture and walls as inscribable objects. The Renaissance book

was an object with multiple functions, none of which was fully determined by its text. It was a container, a writing tablet or notepad, and a veritable bookshelf all at once. The surviving evidence of reading habits and uses such as these puts pressure on the prevailing categories of book history and related literary-critical approaches that have perhaps been overly rigid in separating out utility and instrumentality from aesthetics and affectivity, and that have furthermore parsed intellectual from material utility—books as information, in other words, from books as objects or things [40].

Knight goes on to demonstrate that the words “furniture” and “furnishing” had broader applications then, applying to both material and intellectual objects in such a way as to cast in question our distinctions between them. He notes that this usage also reflected the physical place of books in the home. The tended to be scattered almost anywhere and everywhere. They had not yet assumed a conventional place, such as on the bookshelves that became common later.

Knight’s article raises all sorts of interesting questions about the relationship between the material book and its textual contents which makes it of interest here. But his discussion does not blend obviously with our category of “iconic” books. That is, we usually assume that books have become less iconic and more utilitarian over time as modern publishing has made them more ubiquitous and more disposable. Yet Knight’s description of book use in the Renaissance home suggests a less iconic view of books, one in which their “proper” place and use had not yet become so culturally defined.
Labels: book history, libraries, printing, reading, shelves, theory
Email ThisBlogThis!Share to TwitterShare to FacebookShare to Pinterest
No comments: 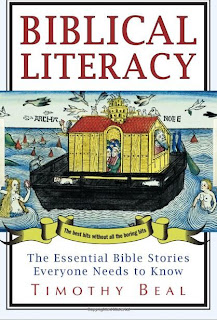 Here's a quick little interview with Tim Beal, whose book Biblical Literacy: The Essential Bible Stories Everyone Needs to Know was just published with HarperOne. While the book deals a lot with the semantic dimensions of scripture, it also explores the iconic elements as well.

Telling in this short interview is a curious observation Beal makes: "A lot of people have picked up a sort of 'keep away' and 'no trespassing' message when they see a Bible with a black leather cover." Here, the image of the Bible becomes somewhat anti-iconic, something that pushes back rather than invites one in.

This seems to be an important dimension in examinations of iconic books: images that repulse.
Labels: Bible, bindings, legitimacy (ethos), new research
Email ThisBlogThis!Share to TwitterShare to FacebookShare to Pinterest
No comments:

Iconicity from a Book History perspective

Posted by Jim Watts
(Deirdre Stam participated in the Saturday sessions of last month's Iconic Books Symposium. She later wrote me some reflections on the event which I think are worth sharing with a wider audience. I'm reproducing them here with her permission.)

When putting myself in the shoes of a person in the field of religion, I could understand your statements about scholarship in that and other humanities areas ignoring the "iconic" element of texts and of their physical manifestations. Working in another area, though, as I have for many years, I've become aware of an enormous body of inquiry in "book history" about the physical history and properties of texts and the more recent expansion of concerns relating to the "book." Particularly since Donald McKenzie's work in the 80's, drawing significantly from the French theorists of the previous decades, the field has looked at both the physical book (its printing, manufacture, etc.) and, more recently, its uses and significance in its culture. Robert Darnton would be a principle proponent as would Anthony Grafton, both eloquent spokesmen for this approach. Many of the texts they have addressed have been iconic, and in some cases the editions are iconic. Sometimes even the copies they have examined have had iconic properties sometimes for reasons relating to the text, but sometimes for different reasons having little to do with the textual and/or intellectual content.

For this topic of iconic "books" in religion, I think it would be helpful to break down that word "book" into "text," "manuscript" if appropriate, "edition" if appropriate as for printed works (and family of editions), and "copy" within an edition. A copy, for example, can be iconic because of its unique binding, or its variants, or its association (such as having been owned by Thos. Jefferson as was a Koran recently used to swear in a Detroit congressman). The intellectual content was really secondary in this example. The term "book" while a good catch-all for the many issues addressed in a meeting such as this, is too broad, I think, for clear communication. It seemed to me that some attendees assumed the codex form when they heard "book," or allowed codex and scroll, but drew the line at web page or oral recitation. Others had a broader range of possible physical forms in mind when they heard the term. The distinctions described above might have eliminated some confusion.

For a sense of present-day book history, I would strongly recommend looking at the offerings of the Rare Book School, located at the Univ. of Va. but somewhat independent of it. RBS is a non-degree, continuing education program of about 100 courses a year, with some given at the Morgan Library and Walters Art Gallery and elsewhere, which are attended by (grown up) curators, academics, collectors, and obsessives of various sorts, with a small sprinkling of graduate students. The emphasis is on the physical book. While book historians have become interested in run-of-the-mill publications in recent years, the bulk of time is still devoted to iconic texts and publications. The new director is the charismatic book historian Michael Suarez, SJ, who left a pair of tenured positions at Oxford and Fordham to give the school a new and probably more scholarly direction. (It was very curatorial before -- but great anyway.) You'd enjoy meeting Suarez and I suspect you'd enjoy a week-long course at Rare Book School. Total and exhausting immersion. The Univ. of Va. has a vast workshop creating digital versions of texts and related databases; that is in itself an eyeopener. (There are Rare Book Schools at Lyons and UCLA but these are newer, smaller, and only tangentially related to the "mothership" at UVa.)

A number of rare book libraries have scholarships for brief projects on the history of the book using their collections. (Fellows need to use the materials uniquely held in these institutions -- the emphasis is on the physical.) The attendees might like a list of these fellowships even after the fact of the "Icon" conference itself -- the libraries include AAS, Newberry, and a dozen or so others. Some of these libraries belong to the Independent Research Library Association (IRLA) and their fellowships would be accessible, directly or indirectly, through the web site of that organization. The SHARP newsletter lists a lot of these opportunities. While many fellows study iconic works in the collections of these libraries, I think that the emphasis on the "iconicism" itself, especially within religious materials, would be novel and welcome. AAS does a theme each year; I wonder if this theme might appeal to them for a future summer.
Labels: book history, edition, libraries, manuscript, printing, research, theory
Email ThisBlogThis!Share to TwitterShare to FacebookShare to Pinterest
No comments: 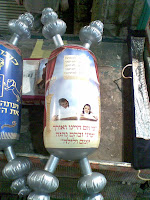 Yesterday was the Jewish holiday of Shemini Atzeret held on the eighth day of the Feast of Tabernacles, better known in contemporary Judaism as Simehat Torah – the Rejoicing of the Torah. This name derives from the Jewish Babylonian custom, which in the Middle Ages became prevalent in all the Jewish world, of concluding the annual Torah reading on Shemini Atzeret.
Since the early Middle Ages special customs evolved in which the synagogue's Torah Scrolls were paraded and danced with on this day. These are known as hakaphot – that is "encirclings" – because the scrolls are carried around the synagogue's bimah.

Here's a short video of hakaphot in a Chasidic synagogue:

Children are encouraged to take part in the hakaphot, but as they cannot be entrusted with the precious Torah Scrolls, they are given other objects to parade with – special flags or small Torah Scroll replicas. A few days ago, while walking down Jerusalem's Mahane Yehuda market, I noticed something I've never seen before: 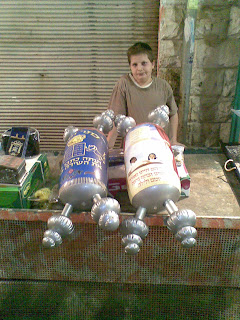 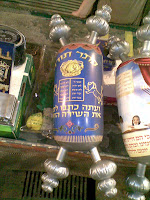 Posted by Jim Watts
Stephen Gertz on Book Patrol posted the following, which is worth reproducing in full: 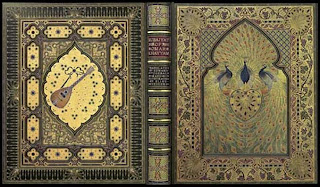 "In 1912, bookbinder Francis Sangorski decided to produce the most elaborate binding of all time, a jeweled edition of The Rubáiyát of Omar Khayyám with illustrations by Elihu Vedder. The magnificent binding was a masterwork and contained almost 1,200 jewels. But the book and its binder were doomed.

The Harry Ransom Center recently held a stunning exhibition based upon the book and this masterpiece of bookbinding art, The Persian Sensation: The Rubáiyát of Omar Khayyám in the West.

The Ransom Center has also produced a video telling the tragic story of what happened to the greatest binding ever created:"