Controversy over Writing in a Bible 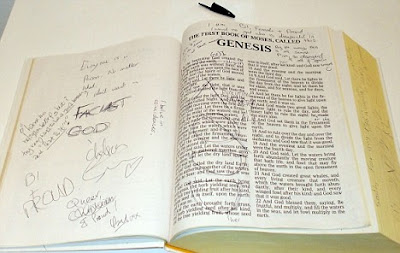 Many Christians, especially in Evangelical circles, consider writing notes in their personal Bibles as a responsible form of study and devotion. However, an invitation to the public to do so in Glasgow has created controversy, reports the Daily Mail:

Next to the copy of the Bible at the Gallery of Modern Art (Goma) in Glasgow is a container of pens and a notice, which says: 'If you feel you have been excluded from the Bible, please write your way back into it.'

The exhibit, entitled Untitled 2009, was put forward by the Metropolitan Community Church with the aim of reclaiming the Bible as a sacred text. But its pages have been scrawled with comments including 'F*** the Bible' and 'I am Bi, Female & Proud. I want no god who is disappointed in this'.

The exhibition was created by artists Anthony Schrag and David Malone, alongside organisations representing gay Christians and Muslims.

The description of the exhibit (actually titled "Made in God's Image") on the museum's website argues:

While some of the works may be controversial from the more traditional and right-leaning positions, the exhibition challenges the assumption that one cannot lead a fully spiritual life while identifying as Lesbian, Gay, Bisexual, Transgendered and/or Intersexed.

It is part of an effort to "promote acceptance and understanding, encourage debate, and tackle questions about LGBT representation, place and history in today’s society." But the extent of the controversy seems to have caught the planners by surprise. Jane Clarke, a minister of the Metropolitan Community Church, "said she regretted the insults that had been written in the Bible. ... 'The Bible should never be used like that. It was our intention to reclaim it as a sacred text.'"

From an iconic books perspective, the controversy illustrates the fact that what counts as "desecrating scripture" is a very fluid standard and not just when the interface of religion and sexuality is involved. The negative reactions reported by the Daily Mail also show the mutual influence in today's media linked world between the standards applied within different religious traditions:

Andrea Minichiello Williams, director of the Christian Legal Centre, said: 'We have got to a point where we call the desecration of the Bible modern art. The Bible stands for everything this art does not: for creation, beauty, hope and regeneration.'

'A Church of Scotland spokesman said: 'We would discourage anyone from defacing the Bible.'

A spokesman for the Catholic Church said: 'One wonders whether the organisers would have been quite as willing to have the Koran defaced.' 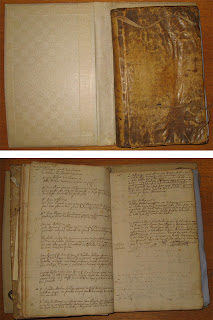