CFP for SCRIPT panels at the 2015 AAR/SBL in Atlanta

SCRIPT will once again be presenting concurrent panels with the AAR/SBL Annual Meetings in Atlanta on November 21-24, 2015.


We invite papers on all aspects of iconic and performative texts, and especially papers that explore the sensory aspects of engaging with books and scriptures.

CFP for SCRIPT panels at the EIR in Montreal in May

SCRIPT will once again be presenting panels of papers on iconic and performative texts at the Eastern International Regional meeting of the AAR in Montreal, May 1-2.


We invite proposals for papers that address the iconic and performative dimensions of specific texts or a range of texts. We particularly encourage studies that also engage the EIR's theme "Desire & Devotion", but all SCRIPT related subjects are welcome.

Each proposal should contain the following in a single e-mail attachment in MS Word format:
Send proposals to scriptsecretary@gmail.com.
Deadline: February 1, 2015.
Labels: conferences
Email ThisBlogThis!Share to TwitterShare to FacebookShare to Pinterest
No comments:

SCRIPT at SHARP in Antwerp

SCRIPT sponsored nine papers in three panels at the of SHARP annual meeting in Antwerp, Belgium on September 18-20, 2014.

On the first panel, "Canonizing and Scripturalizing Iconic Books," I introduced the Iconic Books Project. My paper, “Iconic Scriptures from Decalogue to Bible,” described the iconic motivations that generated the Ten Commandments and the scroll of Torah in ancient Israel. Michael Como (Columbia University) explored the religious, social and environmental effects of bringing Buddhist scribal bureaucracy to Japan in “Canon, Ethnicity and Kingship in Ancient Japan." Kristina Myrvold (Linnaeus University) described how Sikhs narrate the early history of the Guru Granth Sahib in “Entextualization of Sikh Texts in Religious Historiographies and Performances.”

On the second panel, "Literary and Iconic Canons," Jonas Svenson (Linnaeus University) borrowed the concept of contagion avoidance from cognitive psychology to describe Muslim concern to protect the purity of the Qur'an, in “The double Scripture: explaining diversity and conflict in Muslim perceptions and practices in relation to the Qur’an.” Rachel Fell McDermott (Barnard College, Columbia University) then described the life and controversial influence of the Bangladeshi national poet Kazi Nazrul Islam in “When a National Poet is a Heretic: The Collision of Literary and Religious Canons.” Karl Ivan Solibakke (Syracuse University) concluded the panel with by mediating two 20th-century uses of texts and images in “Mimesis and Poesis: Walter Benjamin’s and Vilem Flusser’s Translational Approach to Script.”

In the third panel, "Scriptures as Icons and Talismans," Dorina Miller Parmenter (Spalding University)  advanced theories of iconic books by employing Affect Theory in “Saved by the Book: Exploring the Christian Bible as Effective and Affective Object.” David Ganz (University of Zürich) described medieval Christians' concern to "cover the nakedness" of a book of scripture with decorative bindings in “Clothing Sacred Scripture: Books as Holy Objects in the Western Middle Ages.” Finally, Bradford Anderson (Mater Dei Institute, Dublin) explored the rhetorical and ritual use of Bibles to establish religious and national identity in "'This booke hath bred all the quarrel': The Bible in Seventeenth Century Ireland."

Discussion of each of the papers was lively and continued over several dinners in restaurants on various squares of Antwerp. The SHARP meeting, on the theme "Religions of the Book," provided a venue for many other papers on the impact of book production and book reading on religion, and vice versa. The full program can still be accessed here.
Labels: affect theory, Bible, book history, Buddhists, conferences, media, memory, nationalism, new research, Quran, reading, SCRIPT, Ten Commandments, Torah
Email ThisBlogThis!Share to TwitterShare to FacebookShare to Pinterest
No comments:

Posted by Jim Watts
It has become common practice in the U.S. Congress to provide a variety of texts for ritual oaths of office. The Washington Times reported in January, 2013:

As religions have expanded, so have the options for swearing-in ceremonies.
Both House and Senate lawmakers are officially sworn in on their chamber floors, and then have ceremonial swearings-in for keepsake photos afterward. Members are not required to hold any text at all, merely to raise their right hand and swear — but many do hold something, particularly during the ceremonial oath.
The Library of Congress even provides books to House members who don’t bring their own, and lawmakers can pick them off a table when they enter the ornate room for a one-on-one ceremonial oath with Mr. Boehner.
On Thursday they had nine options: Catholic, Protestant and Eastern Orthodox Bibles, the Torah, the Koran, the Book of Mormon, Hindu Vedas, an ornate box holding Buddhist Sutras, and copies of the U.S. Constitution.

Posted by Jim Watts
A sculpture in the harbor of Piran, Slovenia, reproduces the town in the form of heaps of books (courtesy of Lyn Watts). 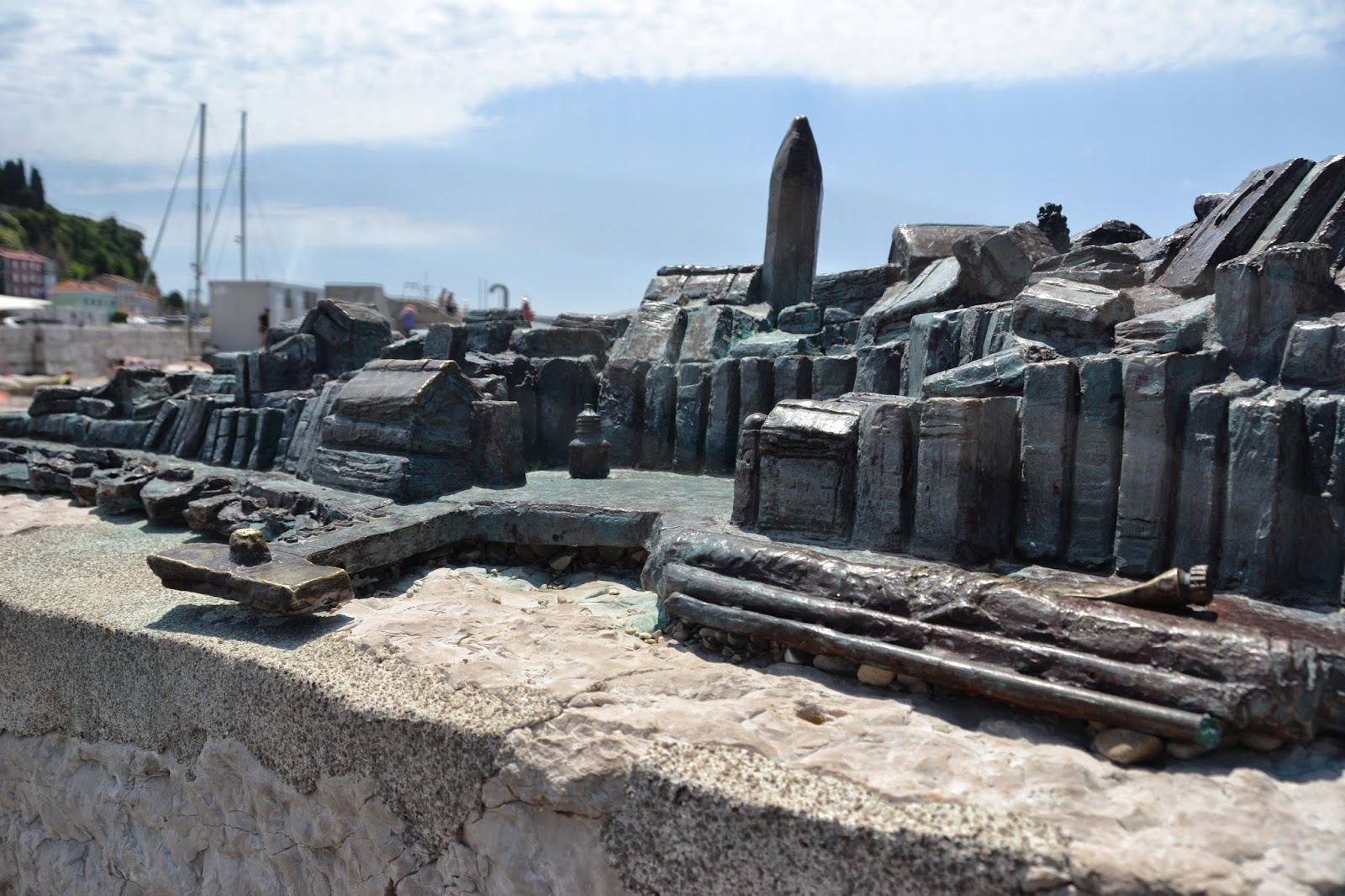 Posted by Jim Watts
A mural on an apartment house wall in Ljubljana, Slovenia (courtesy of Lyn Watts). Translation anyone? 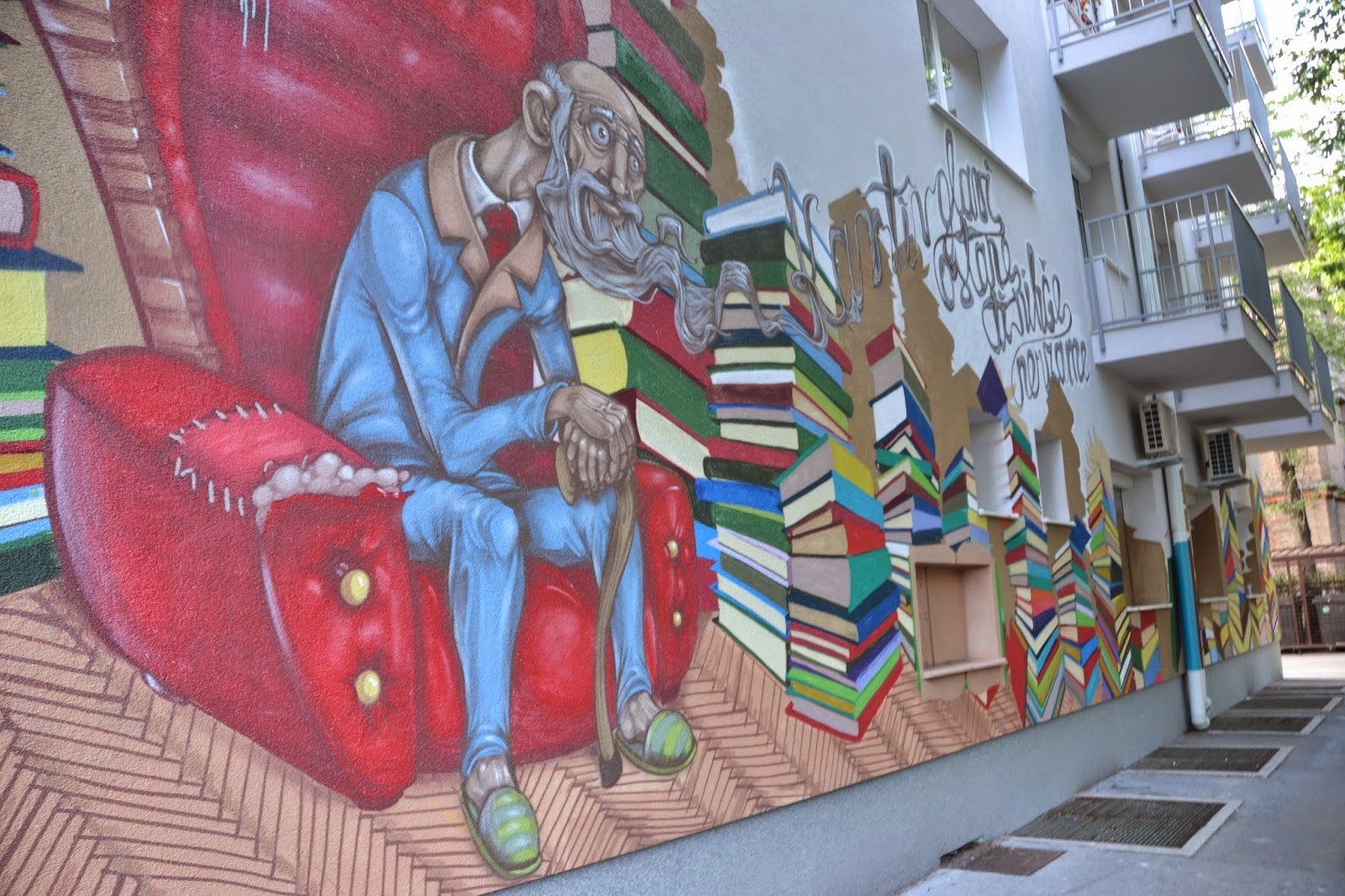 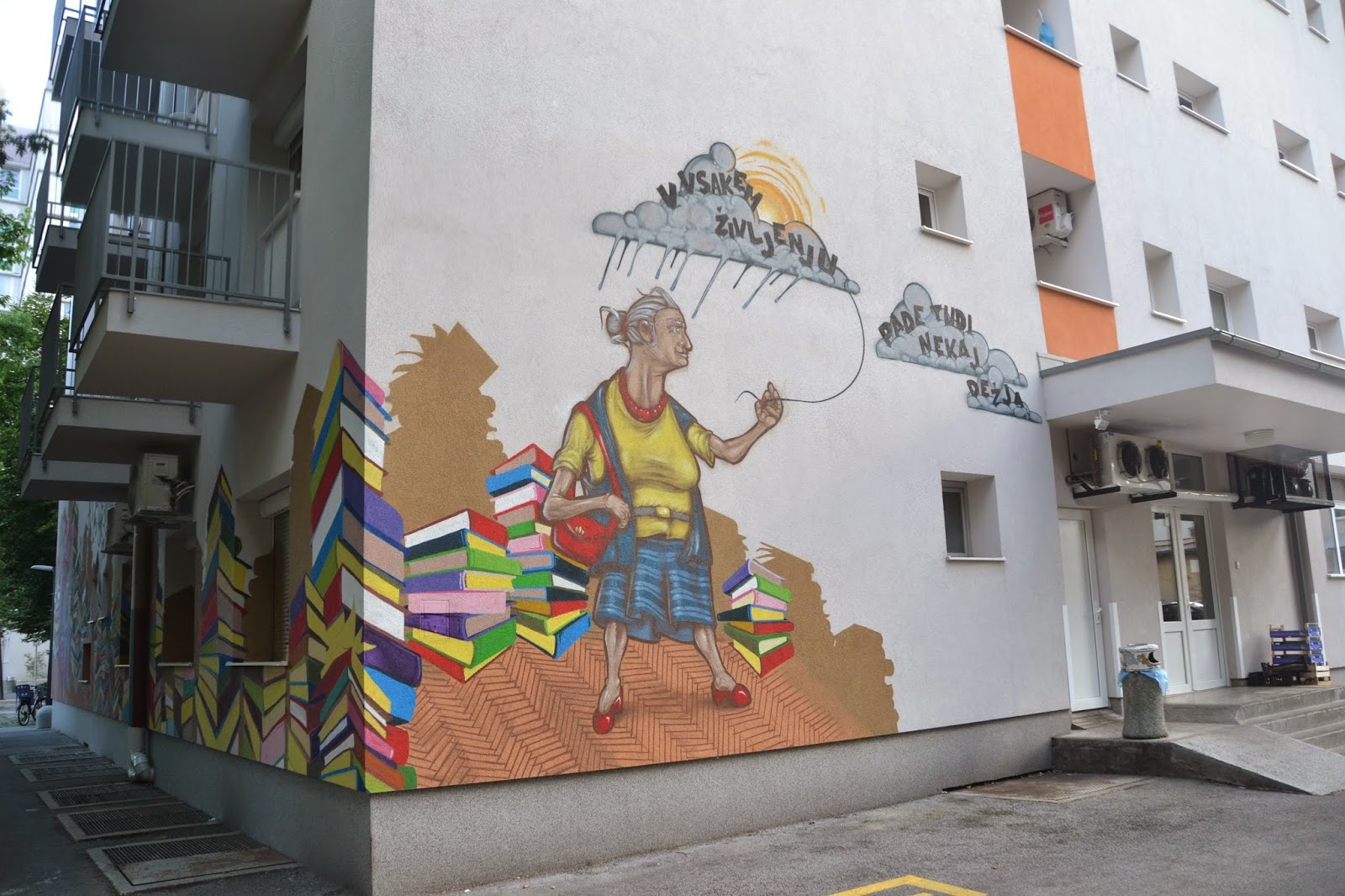 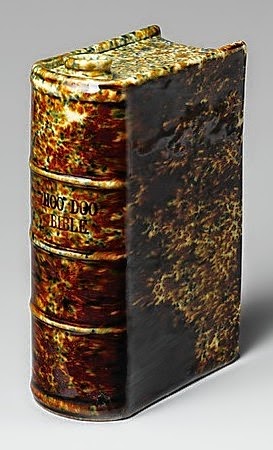 A new blog about book-like objects, About Blooks: Discovering the Book as Object, has been started by Mindell Dubansky, who ishead of the Center for Book Conservation at The Metropolitan Museum of Art. Her early posts include pictures and descriptions of book clutches and hand-bags, a book harmonium, and this 1849 ceramic flask.

Xu Bing's Book from the Sky

Posted by Jim Watts
Zak Braiterman has posted great pictures of Xu Bing's installation, Book from the Sky (1988), that is part of the Metropolitan Museum's current Ink Art exhibit. 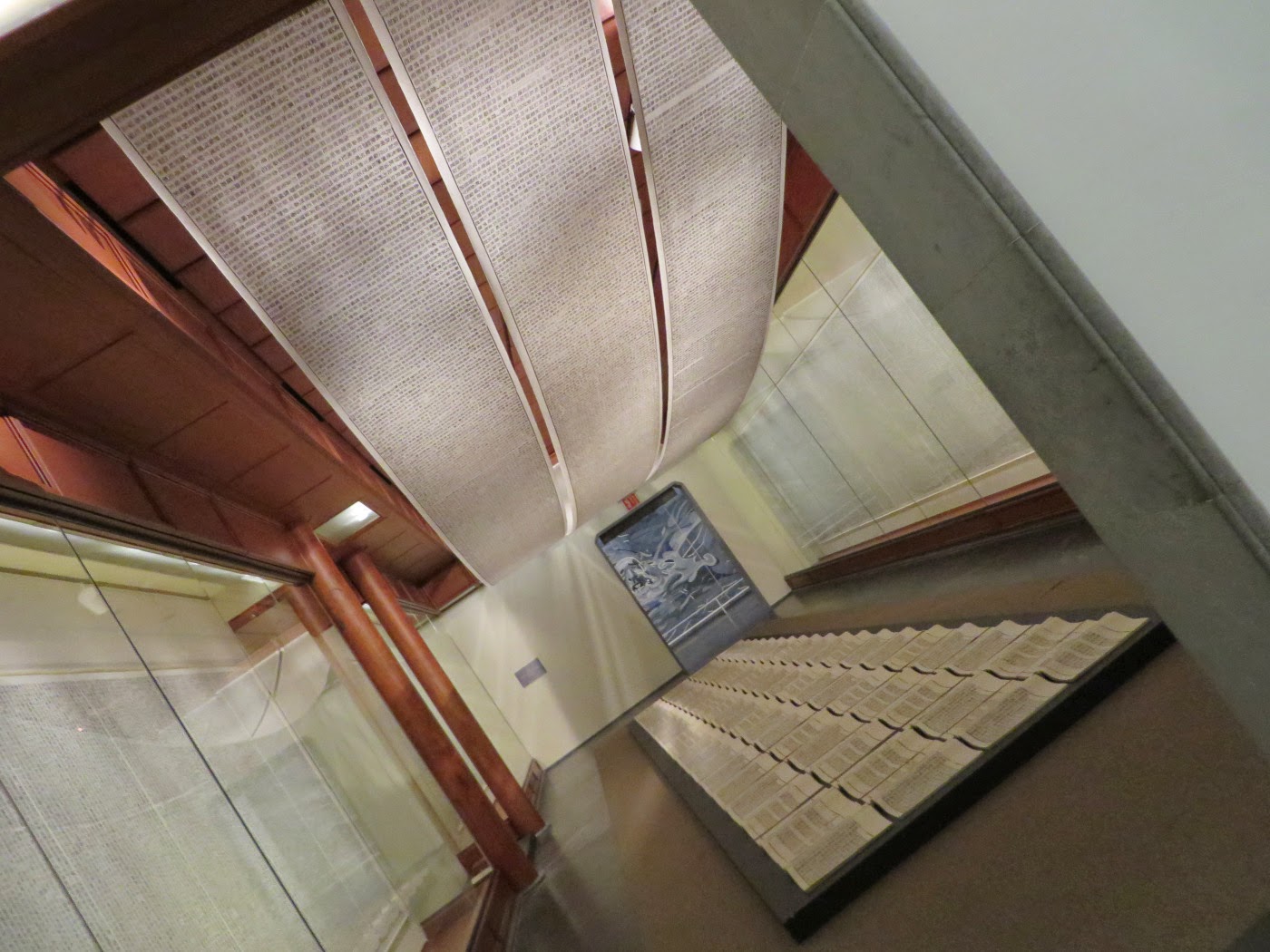 This "book from the sky" consists of scrolls written in unintelligible characters that literally say nothing. Braiterman summarizes the effect: "Rendered object-like, the word has been made neither clear nor intelligible. Not really a book or a communication, “Book from the Sky” is just an idea, suggesting something infinite, the idea of a book, the idea of communication, pure writing, non-intentional."

Posted by Jim Watts
Arkyves, a collection of sources for the study of the History of Culture, showcases the beauty of print fonts with a zoomable collage of printed pages produced between 1469 to 1935. 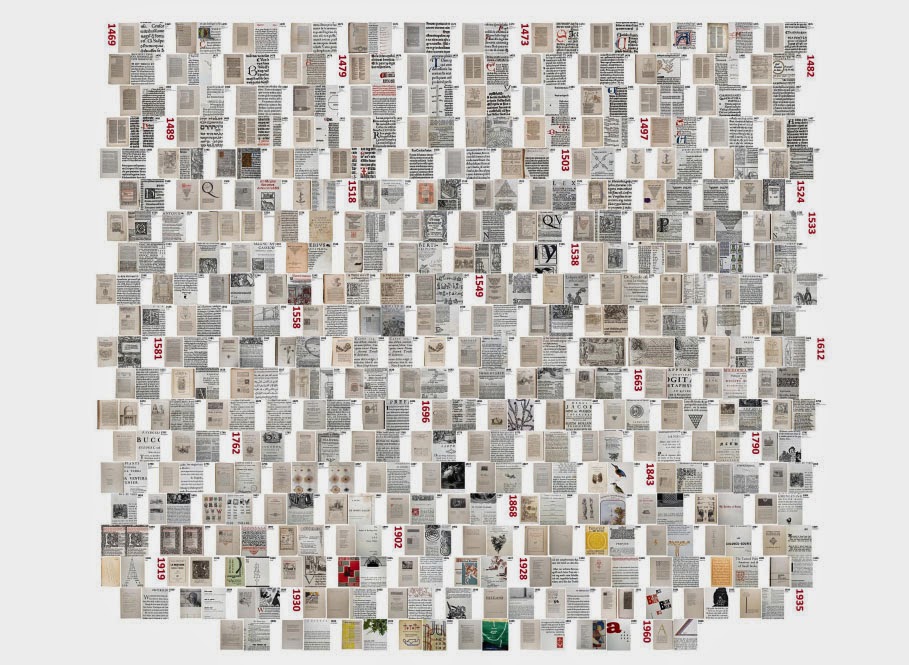 Torah to the Moon

Posted by Jim Watts
The Washington Post reports plans to send a Torah scroll to the moon. "The Torah on the Moon project, based in Tel Aviv, has been courting private firms to deliver a handwritten Jewish scroll called a sefer Torah to the lunar surface. Later flights would carry Hindu scriptures called the Veda and the I Ching, an ancient Chinese philosophical work. Each document would be housed in a capsule designed to protect it from the moon’s harsh radiation and temperature changes for at least 10,000 years." The Post article concludes by noting, "The texts would join a Bible left on the moon in 1971 by Apollo 15 commander David Scott. The red leather Bible sits on the control console of an Apollo moon buggy."
Labels: legitimacy (ethos), preservation, technology, Torah
Email ThisBlogThis!Share to TwitterShare to FacebookShare to Pinterest
No comments:

Posted by Jim Watts
The Wire reported that Suzi LeVine, the new U.S. ambassador to Switzerland and Liechtenstein, "was sworn in ... by raising her right hand and placing the left on a digital copy of the Constitution. ... LeVine, a former Microsoft executive ...  used a non-descript "off brand" e-reader, so as not to stake an official U.S. government position in the Kindle vs. Nook wars." 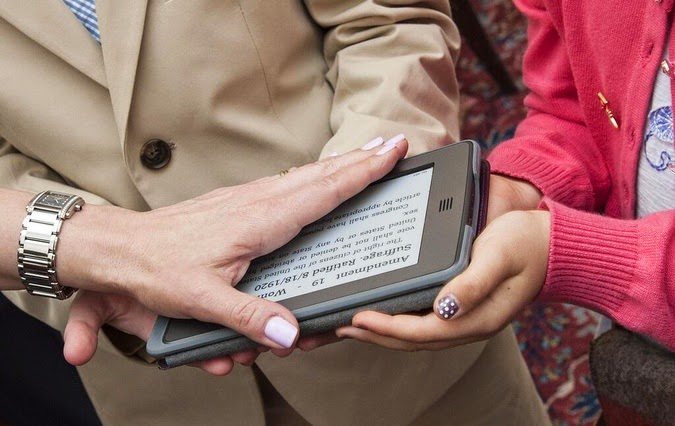 Call for Journal Articles on "Religion and the Book"

Posted by Jim Watts
The online journal, Mémoires du livre  / Studies in Book Culture, has issued a call for articles on the theme, "religion and the book." (This same theme is being used by the SHARP Annual Meeting in Antwerp this coming September.) Scott McLaren, the editor of this special issue of the Open Access peer-reviewed journal, "invites submissions in English or French that explore the relationship between religion and the book, broadly defined, in either historical or contemporary settings and from a variety of disciplinary and interdisciplinary perspectives. Articles concerned with print culture and Judaism, Christianity, and Islam, as well as Asian and African religions are most welcome."

Posted by Jim Watts
SCRIPT will present three panels of papers at the SHARP annual meeting in Antwerp, Belgium, on the theme "Religions of the Book:

Labels: conferences, SCRIPT
Email ThisBlogThis!Share to TwitterShare to FacebookShare to Pinterest
No comments:

The Bible in American Life

Posted by Dori Miller Parmenter
Coinciding with their national study on The Bible in American Life, The Center for the Study of Religion and American Culture at Indiana University-Purdue University Indianapolis is soliciting paper proposals for a conference to be held August 6-9 on "how Americans past and present have used the Bible in their daily lives."  This seems like a great opportunity to talk about iconic uses of the Bible in America, adding to the "historical, cultural, sociological, and theological" approaches that the conference claims to highlight.
Labels: America, Bible, conferences
Email ThisBlogThis!Share to TwitterShare to FacebookShare to Pinterest
No comments:

Posted by Jim Watts
Robert Bolick on Books On Books presents an interview with book artist, Andrew Hayes, along with many pictures of his works, such as this one (Wry, 2013). 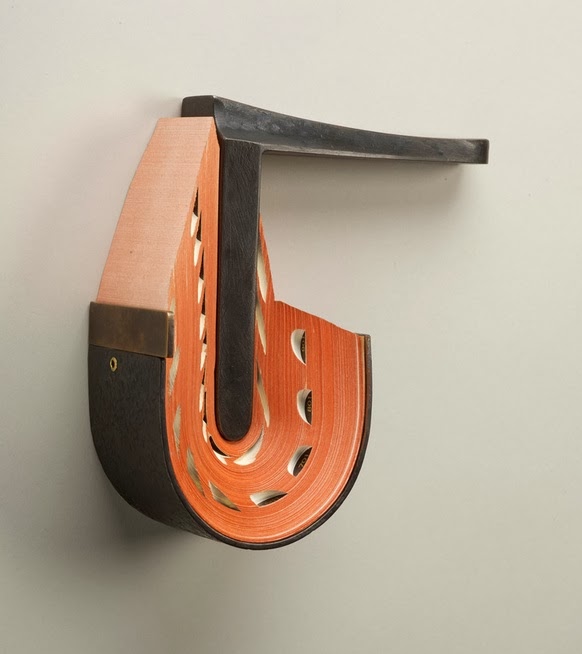 Book art can easily fall off into mere craftwork. On the one hand, the book artist requires the freight that the book’s content and form carry, .... But the degree to which the freight weighs down the treatment, or the handling does not take the material beyond itself, that is the degree by which the work is closer to handicraft than to art.

And then quotes Hayes:


The book pages are a loaded found material. Other materials I use like steel that I find at the scrap yard come with built in history as well but it may not be as universal as the book pages.

Posted by dault
The American Bible Society has published rankings this week for the most and least "Bible-minded" cities in America - complete with helpful infographic.

Top of the list (the most) is Chattanooga, Tennessee. At the bottom (the least) is Providence, Rhode Island.

An article about it is here.

Posted by Jim Watts
My second New Year's gift comes from Emma Brodeur, who took this picture in the Cazenovia, NY, art park: 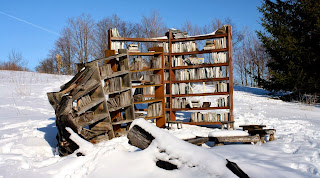 Posted by Jim Watts
My New Year's gifts included new photos of iconic books in art and architecture. First, from Cordell Waldron, come these pictures of a rest stop on an Iowa high way (I-80 Westbound near Tiffin). Cordell notes that, "The rest stop theme is Iowa's education history, so the columns of the building are books." 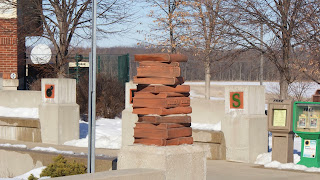 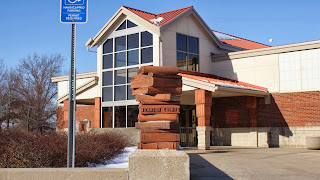 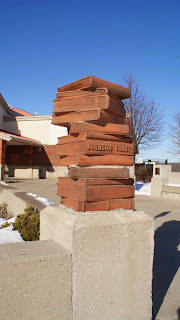