Posted by Jim Watts
PRI reports on a hand-made book in Bengali "Patua" style that commemorates the victims of the 2004 Tsunami. Pictorial Patua scrolls are designed to accompany oral chants or songs. This video shows the Tsunami book being displayed while the keening chant is recited, and also illustrates the silkscreen process by which the scroll/book is made:

Posted by Jim Watts
While some university libraries (including mine: see here, here and here) are hiding books away to make roome for computers and meeting spaces, some businesses are putting books front and center to boost revenues, and they are not just bookstores. The Library Hotel in New York offers rooms numbered by the Dewey Decimal system. They are stocked with books and art appropriate to that subject classification. The hotel's website promises:

Each of the ten guestroom floors of the Library is dedicated to one of the ten major categories of the Dewey Decimal System .... Each of the sixty exquisitely appointed guestrooms has been individually stocked with a collection of art and books relevant to one distinctive topic within the category of the floor on which it is situated. 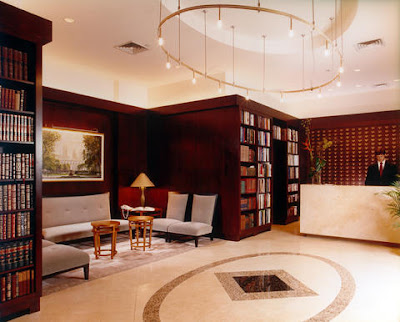 Posted by Jim Watts
David Dault has blogged about the overlap and differences between his Material Scriptures project and the Iconic Books Project. He observes that:

Material Scripture's complementary trajectory attempts to explore Althusser's claim that "ideology has a material existence." Where Watts's project looks at the physical object being transformed sociologially into an ideological signifier, Material Scripture looks closely at how theologies (as ideologies) are transformed into the layered materiality of "book-ness."

In both cases the question of materiality is paramount, but the methodologies are distinct enough to be generative of some deep conversations in the years to come.

Posted by Jim Watts
The Chronicle of Higher Education presents a profile of Terry Belanger, founder and director of UVA’s Rare Book School (text for non-subscriber’s here). The reporter immediately describes Belanger’s pragmatic attention to the materiality of books:

Some years ago, Terry Belanger found a striking way to reveal the reverence that many citizens of the digital age continue to feel for old books. It is a sentiment he finds fascinating but only rarely appropriate or useful. Belanger, who retired in September as director of an educational institute called Rare Book School but who continues to teach there, brings an old volume to class, speaks about its binding and typography, and then, still discussing the book, rips it in half and tears it into pieces. As his horrified students watch in disbelief, Belanger tosses the shards into a nearby trash can and murmurs, "Bibliography isn't for sissies."

It is a brilliant piece of classroom theater. In one transgressive act, Belanger lays bare the pieties of his students and stakes out his own more pragmatic relationship with old books.

The story is notable for paralleling the actions of some Bible professors who do similar things to Bibles to emphasize the importance of the contents, not the form. Like them, Belanger also tries to disrupt emotional attachments to the form of books, but in order to draw more attention to their material functions:

Belanger despises the tendency of some of his colleagues in the world of rare books to allow their fondness for books to become an undiscriminating fetish of form over function. He calls that "pretty-book syndrome" and works hard to guard against it by emphasizing the prosaic aspects of working with rare books and playing down the spiritual satisfactions. As he likes to quip, "Librarianship is not all glamour."

… Belanger told me that he has struggled throughout his career to "desanctify the notion that a book is a holy object" because he believes that "we have a better chance of saving books if people see that they have a use than if they are simply religious objects." Convinced that sentiment and veneration are not stable grounds upon which to build an academic field, Belanger wants rare-book libraries to be seen as laboratories, not shrines.

The whole article is well worth reading, but these quotations do a particularly good job of highlighting issues of particular interest to the Iconic Books Project. Rather than dismissing “pieties” about books as Belanger does to call attention to their material functions or as almost all scholarship does to call attention to their textual contents, we are calling attention precisely to such book veneration. Our goal is not to increase or reinforce it: our project is descriptive, not normative. But the knee-jerk dismissal of books’ iconic values has produced a blind spot in scholarship that hides from analysis the social transactions conducted through books and other kinds of iconic texts. It is that blind spot that we are trying to expose to correct for its distorting affects. One such distortion shows up in this article's approving quotation of Belanger above: it is a very odd historical judgment indeed to think that laboratories are more likely to be preserved than shrines ...
Labels: bindings, book history, fascination, materiality, preservation, theory
Email ThisBlogThis!Share to TwitterShare to FacebookShare to Pinterest
1 comment: