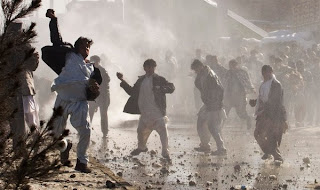 The accidental burning of Qur'an's by U.S. personnel in Afghanistan have provoked two days of violent protest so far and led to U.S. bases and offices being locked down for security. Scripture desecrations, including Qur'ans, has been a frequent subject of commentary on this blog as well as the topic of my 2009 online case study.
Labels: desecration, media, Muslims, politics
Email ThisBlogThis!Share to TwitterShare to FacebookShare to Pinterest
2 comments: 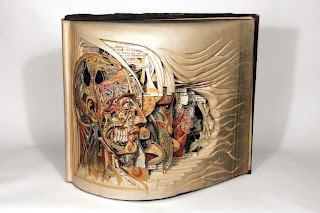 Jim Watts noted an exhibit by Brian Dettmer a few years ago. Dettmer seems to be continuing his book art work in some fascinating ways, as see in the images here.

Dettmer is also noted in the following book, which I don't think this has been noted in these pages, but this looks worth checking out (especially considering the subtitle):

Book Art: Iconic Sculptures and Installations Made from Books 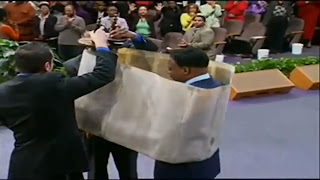 A remarkable video shows a Messianic Jewish rabbi and charismatic preacher, Ralph Messer, wrapping Bishop Eddie Long in a Torah scroll as a ritual of enthronement and new birth:

The video prompted a storm of controversy. Messianic Jews have repudiated Messer, and Bishop Long has apologized. But Messer has done such things before, as this video proves:


Aside from being ritually unprecedented in either Judaism or Christianity, Messer’s explanation of the ceremony is full of falsehoods. He claims that the Torah was a “constitution of God” given to every ancient Israelite king and wrapped around the king at his inauguration. There are no such accounts in the Bible. This is the first I’ve ever heard of a Torah scroll being wrapped around anyone. Messer also recounts some Jewish practices accurately, such as using a pointer so as not to touch the scroll with bare hands, while simultaneously breaking that practice himself.  Brent Strawn of Emory University did a good job of pointing out the mistakes and problems on CNN.


Messer’s actions at New Birth Baptist Church are interesting both as an example of how ritual innovation gets justified and as an example of the ritual use of an iconic book. Ritual innovation is usually disguised as ritual restoration: rather than starting new practices, an old practice is being revived. So Messer claims to be reproducing an ancient Jewish royal. His attempt differs from many other ritual innovations only in how obviously implausible they are.

Messer’s actions are also a remarkable example of the common practice of manipulating an iconic book to invoke its authority while ignoring, even contradicting, its contents. Ritualizing the iconic dimensions of texts typically functions to convey legitimacy to the people manipulating or receiving them. That’s exactly what Messer does for Bishop Long: by wrapping the Torah around Bishop Long, he proclaims his coronation and his “new birth”—claiming the legitimacy of the scripture for a religious leader embattled by scandal.


(My thanks for Bradford Anderson for bringing this to my attention.)
Labels: legitimacy (ethos), rituals, scrolls, Torah
Email ThisBlogThis!Share to TwitterShare to FacebookShare to Pinterest
No comments: