Miniature Books: The Format and Function of Tiny Religious Texts, edited by Kristina Myrvold and Dorina Miller Parmenter, has now been published by Equinox. 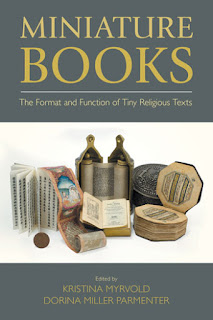 Miniature books, handwritten or printed books in the smallest format, have fascinated religious people, printers, publishers, collectors, and others through the centuries because of their unique physical features, and continue to captivate people today. The small lettering and the delicate pages, binding, and covers highlight the material form of texts and invite sensory engagement and appreciation. This volume addresses miniature books with a special focus on religious books in Jewish, Christian, Muslim, Hindu and Buddhist traditions. The book presents various empirical contexts for how the smallest books have been produced, distributed, and used in different times and cultures and also provides theoretical re ections and comments that discuss the divergent formats and functions of books.