Posted by Jim Watts
The author, James Gleick, who negotiated on behalf of authors in the recent legal settlement between Google and publishers, writes in the New York Times about the book business after Google Books.

He argues against those who think the book is obsolete:

I think, on the contrary, we’ve reached a shining moment for this ancient technology. Publishers may or may not figure out how to make money again (it was never a good way to get rich), but their product has a chance for new life: as a physical object, and as an idea, and as a set of literary forms.

As a technology, the book is like a hammer. That is to say, it is perfect: a tool ideally suited to its task. ... I’m just saying that the book is technology that works.


He observes that the range of genres taking book form has been narrowed by the electronics revolution:

There’s reading and then there’s reading. There is the gleaning or browsing or cherry-picking of information, and then there is the deep immersion in constructed textual worlds: novels and biographies and the various forms of narrative nonfiction — genres that could not be born until someone invented the codex, the book as we know it, pages inscribed on both sides and bound together. These are the books that possess one and the books one wants to possess.

For some kinds of books, the writing is on the wall. Encyclopedias are finished. ... Basic dictionaries no longer belong on paper .... And those hefty objects called “telephone books”? As antiquated as typewriters. The book has had a long life as the world’s pre-eminent device for the storage and retrieval of knowledge, but that may be ending, where the physical object is concerned.

Glieck sees a great value for authors in Google's project:

The vast majority [of books scanned by Google], four million to five million, are books that had fallen into a kind of limbo: protected by copyright but out of print. Their publishers had given up on them. They existed at libraries and used booksellers but otherwise had left the playing field. ... This means a new beginning — a vast trove of books restored to the marketplace. ...

He has clear advice for how book publishers can survive in these new circumstances:

Go back to an old-fashioned idea: that a book, printed in ink on durable paper, acid-free for longevity, is a thing of beauty. Make it as well as you can. People want to cherish it.

That matches our observation that while the book as information source is facing stiff competition, the book remains unchallenged as the preeminent icon of education, wisdom, tradition, culture and religion.
Labels: ebooks, technology
Email ThisBlogThis!Share to TwitterShare to FacebookShare to Pinterest
No comments:

Posted by Jim Watts
Thaindian News provides a feature story on the regular cremation rites for the Sikh scripture, the Guru Granth Sahib, in northern India:

At Angitha Sahib, the old copies of Guru Granth Sahib from all over the world are put to flames as part of funeral rites. The whole procedure is a way of bidding farewell to the scripture with utmost reverence. This is the only Gurudwara, which performs this ritual.

“Scriptures from all across the world like England, America, Canada and Pakistan have come to Angitha Sahib in Sahaspur for getting cremated. With full respect, these holy epics are first given bath, and then they are wrapped in new clothes. Then these scriptures are treated like living beings. This service is done in privacy,” said Harsharan Singh, Mukhya Sewadaar (chief helper), Angitha Sahib Gurudwara.

When old and worn out scripture reach Angitha Sahib in Sahaspur, first of all they are given bath after which every page is cleansed and later these scriptures are wrapped in white cloth and then the funeral takes place. The cremation lasts over six days and on the seventh day, the ashes are collected. ...

This year about 2,000 scriptures have come from all over the world to Gurudwara Angitha Sahib for cremation, of which around 470 worn out scriptures were flown in from the Great Britain by a chartered flight. (ANI)

It is particularly interesting that the Gurudwara extends its funerary services for scriptures to Christian, Hindu and Muslim texts as well as Sikh. This illustrates the widespread tendency to extend one's own standards for manipulating scriptures to those of other traditions in a spirit of mutual respect and tolerance.
Labels: disposal, Guru Granth, rituals
Email ThisBlogThis!Share to TwitterShare to FacebookShare to Pinterest
No comments: 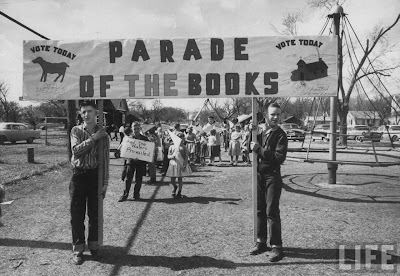 Michael Lieberman on Book Patrol posts this delightful picture of children parading the books selected for the William Allen White children's book awards in Americus, Kansas in 1959. It is from the vast picture archive of Life Magazine that is now being made available on Google Image Search.
Labels: display, rituals
Email ThisBlogThis!Share to TwitterShare to FacebookShare to Pinterest
No comments:

Posted by Jim Watts
The book exhibits at the Society of Biblical Literature meeting focus on academic titles, but that icon of Protestant religiosty, the floppy Bible, is encroaching even here. 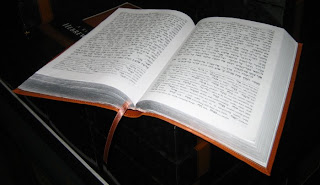 Zondervan's A Reader's Hebrew Bible comes in a limp, light-brown faux-leather binding with silver-tinged pages. The text is BHS with the Westminster morphology at the bottom of the page, for quick reference. As an icon, it is facinating to see how the Reader's Hebrw Bible associates itself simulataneously with the scholar's Biblica Hebraica Stuttgartensia by the color of its cover and with the preacher's bible by its limp cover material and metallic edges. Rumor has it that sales were brisk. 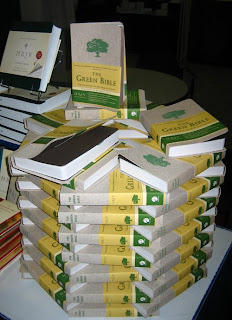 Harper Collins' entry in the floppy Bible competition is the very different Green Bible (see Cordell's previous comment about it). Its limp cover is made of recycled linen, its paper is (partly) recycled, of course, and its NRSV text is periodically rendered in green ink to highlight environmentally friendly verses. In this case, at least, the Bible takes an iconic form that indexes its publishers' intended message directly, and in its own substance models the behavior it aims to elicit from readers!
Labels: Bible, bindings
Email ThisBlogThis!Share to TwitterShare to FacebookShare to Pinterest
1 comment:

Posted by Jim Watts
Those of you heading to Boston for the Society of Biblical Literature Annual Meeting next week-end might want to check out several papers on iconic books. As usual, the Scripture As Artifact consultation on Monday will highlight the subject:

Jay Larson will talk about "Codifying Memory" in the Gospel Codices of late antiquity; and

Zeev Elitzur will start off the session with “Holding an Object”: The Coming of Age of Scripture as Holy Artifact."

Jay is also talk about "The Gospels as Sites of Memory" analogous to monuments in the session on Mapping Memory: Tradition, Texts, and Identity on Sunday morning.

This year, I'm leaving the iconic dimension in their capable hands while I talk about "Performing the Torah: The Rhetorical Function of the Pentateuch" with the Performance Criticism consultation on Sunday afternoon.

Hope to see you in Boston!
Labels: disposal, memory, monuments, performance, theory
Email ThisBlogThis!Share to TwitterShare to FacebookShare to Pinterest
No comments:

Posted by Cordell Waldron
The latest contest in a long history of debates over the presentation of monumental scriptures in public places is unfolding in Pleasant Grove City, Utah. As reported by the New York Times in the article "From Tiny Sect, Weighty Issue for Justices," a city park already has a Ten Commandments monument (donated in 1971 by the Fraternal Order of Eagles) that the town's mayor, Michael W. Daniels, explains as representing "law and history" (but not religion).

Now a religious group called Summum would like to donate a similar monument displaying the Seven Aphorisms that guide the group's theology. Pleasant Grove City did not accept the donation, and the resulting lawsuits have reached the U.S. Supreme Court level. At stake are issues of free speech and freedom of religion in public spaces, and whether a public park that displays the texts of some religions ought to display the texts of other religions as well (if their members choose to donate such monuments). As with other disputes over Ten Commandments monuments, this goes far beyond the text itself, and the physical presence of the monument takes on the weight of Constitutional law; the acceptance (or lack thereof) of a particular religion; and the identity politics of the city, state, and nation.
Labels: display, law, monuments, Ten Commandments
Email ThisBlogThis!Share to TwitterShare to FacebookShare to Pinterest
No comments: 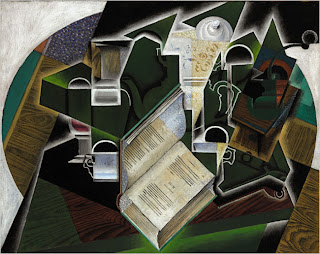 Michael Lieberman on Book Patrol points out that the two top-grossing pictures in Christie’s Nov. 6 auction of Impressionist and Modern art contained images of books. They were “Book, Pipe and Glasses” by Juan Gris (above) for $20 million and Picasso's "Two People" for $16 million.
Labels: art history, display, sales
Email ThisBlogThis!Share to TwitterShare to FacebookShare to Pinterest
No comments:

Betting on the Future of the Book

Posted by Jim Watts
The folks at if:book have issued an invitation to participate in an NEH-funded effort to create "two ambitious digital publishing projects." Their goal is to merge rich multimedia, which so-far largely exists on CDs and hard drives, with internet collaboration, which so far "generally occurs around predominantly textual media."

I find it fascinating that their goal is explicitly to emulate a book:

The printed book is still the gold standard of the academy. The goal of these projects is to produce born-digital works that are as elegant as printed books and also draw on the power of audio and video illustrations and new models of community-based inquiry — and do all of these so well that they inspire a generation of young scholars with the promise of digital scholarship.

It seems like the logical end-point of this line of development would likely look very much like the books on my shelf, or maybe even Dori's beautiful artbook pictured at the left top of this blog, except that the pages inside would contain electronic media. But if that is the end produce, in what sense would that be anything but ... a book?

Meanwhile, the folks at the Long Now Foundation who spend time worrying about a "digital dark age" in our future, are placing their bets on laser-etched titanium for preserving the world knowledge, or at least its languages. They've announced that their Rosetta Disk Project is now complete. You, too, can help preserve this knowledge by taking home one of the last two first-edition disks--for $25,000, or so.
Labels: ebooks, media, technology
Email ThisBlogThis!Share to TwitterShare to FacebookShare to Pinterest
No comments: