Posted by Jim Watts
The Muslim community in a town in north India is on edge after discovering a desecrated Qur'an, according to Thaindian News:

Members of the Muslim community took to the streets and blocked traffic in Uttar Pradesh’s Rae Bareli district after a half-burnt and torn copy of the Quran was found, the police said Thursday.

The holy book was found torn and its pages burnt near the Chhoti Masjid in the Khwajkhan locality in Jaayas town Wednesday night, police added. ...

Protesters blocked roads, disrupting traffic in various parts of Jaayas, about 90 km from here [Lucknow]. The police are yet to make any arrest in the case.

Labels: desecration, Quran
Email ThisBlogThis!Share to TwitterShare to FacebookShare to Pinterest
No comments: 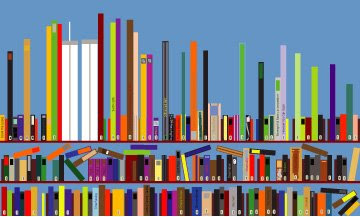 At times Cliff Eyland thinks of himself as a "librarian painter." A longtime bibliophile, Eyland has been painting on 3" x 5" index cards for 30 years. ...

Posted by Jim Watts
Librarians in Leicester, England, have been caught between different religions' contrary views of how their scriptures should be treated, reports the Telegraph:

The situation was brought to light in guidance published by the Museums, Libraries and Archives Council, a quango answering to Culture Secretary Andy Burnham, on how to handle controversial materials.

It said some Muslims in Leicester had moved copies of the Koran to the top shelves of libraries, because they believe it is an insult to display it in a low position.

The city's librarians consulted the Federation of Muslim Organisations and were advised that all religious texts should be kept on the top shelf to ensure equality.

... Some critics have expressed concern that the books will now just be treated as objects to revere rather than books to read.

... Simon Calvert of the Christian Institute said: "It is disappointing if the policy of libraries is dictated by the practices of one group.

"It is particularly disappointing if this is done to put the scriptures beyond reach."

The incident shows the tendency, in religiously pluralistic societies, for the customs regarding treatment of one scripture to be applied to others. Though this story highlights Christian opposition to such tendencies, other stories we've mentioned in the past show Christians themselves making the equation (e.g. in the German TV burning Bible furor of 2007). Though the arguments by contending parties usually cite tradition as if it were invariable, customary practices with iconic books seem to be evolving rapidly. I suspect they always have ...
Labels: Bible, display, libraries, Quran, shelves
Email ThisBlogThis!Share to TwitterShare to FacebookShare to Pinterest
No comments:

Posted by Jim Watts
Iconic books become relics when individual copies are treasured because of their history. But this video illustrates that relic status can be slow in coming:

Labels: Bible, relics
Email ThisBlogThis!Share to TwitterShare to FacebookShare to Pinterest
No comments:

Posted by Jim Watts
The Assyrian International News Agency is reporting that Cypriot authorities have seized a rare Syriac Gospel book from smugglers:

... The bible, estimated to be worth around €2 million, was seized during a raid at the Famagusta bus terminal last Friday where smugglers were seeking to sell it to buyers in the north. It is thought Turkish Cypriot police had been tipped off about the impending sale.

Although the north's 'antiquities department' refused yesterday to comment on the bible, because it was "the subject of an ongoing inquiry", a statement from police said it was bound in deerskin, written in gold letters in the Syriac language, and believed to be around 2000 years old. The bible may have come from the heartland of the Syrian Orthodox community in southeastern Turkey, where a small community remains, despite often being caught in the crossfire between Kurdish rebels and the Turkish military.

"It is very likely to come from the Tur-Abdin area of Turkey, where there is still a Syriac speaking community," Dr Chalotte Roueche, professor of Late Antique and Byzantine Studies at King College, London told Reuters yesterday. ...


Of course, Roueche went on to challenge the dating to a more reasonable range of the 4th century to the middle ages. The book, however, is not (yet?) available for scholars to inspect.

This story illustrates how two aspects of an old Bible's iconic dimension come into conflict: the high monetary value on the (black) market of an old copy of scripture on the one hand versus its iconic value as an identity marker for the Syrian / Assyrian Christian communities of Turkey on the other. In both contexts, the book functions as a relic and relics have always been the subject of controversy and conflict.
Labels: Bible, Christians, legitimacy (ethos), relics
Email ThisBlogThis!Share to TwitterShare to FacebookShare to Pinterest
1 comment: