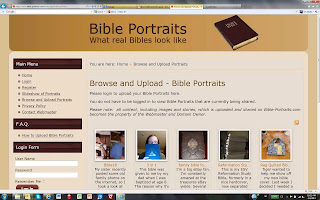 Dori Parmenter launched Bible Portraits: What Real Bibles Look Like. It invites viewers to upload pictures of themselves with their Bibles along with stories about them.

Parmenter wrote "Iconic Books from Below: The Christian Bible and the Discourse of Duct Tape" (Postscripts 6 [2010], 185-200) where she documented the iconic status of marked-up and tattered Bibles as a counter-discourse to the marketing of specially-bound Bibles and Bible covers. Her goal here is to create a collection that illustrates "the physical appearance of Bibles and people’s relationships to this book."
Labels: Bible, bindings, Christians, display, identification, pop culture, portraiture, relics
Email ThisBlogThis!Share to TwitterShare to FacebookShare to Pinterest
No comments:

Bradford Anderson calls my attention to legal actions to suppress religious literature in several countries of Central Asia. Russian authorities have ordered the destruction of modern books tauting the views of Muslims, Hare Krishnas, and Seventh Day Adventist. Protestants and their libraries have been targeted in Uzbekistan and Kazakhstan. Christianity Today interprets this news in the context of Christian revivals in Central Asia in the last several years.

Much of our attention to book desecration and destruction on this blog has focused on highly symbolic actions at attacks on religious legitimacy. But book destruction has in past ages been an effective means used by states to suppress entire religious movements and their memory (e.g. the Manicheans). Governments and courts are still trying this tactic, despite the increasing difficulties posed by two information revolutions--print and digital.
Labels: burned books, Christians, desecration, Gita, Hindus, law, legitimacy (ethos), memory, Muslims, politics
Email ThisBlogThis!Share to TwitterShare to FacebookShare to Pinterest
No comments: