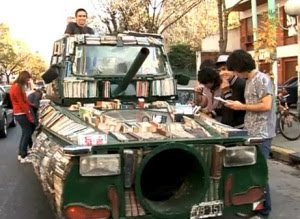 In Buenos Aires, an artist created a "book tank" out of an old military vehicle. He has driven through Argentina handing out free books as an effort for "peace through literature." He calls his creation a "weapon of mass instruction." 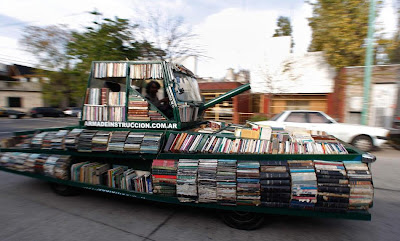 See the video on YouTube where it is clear that the sight of this book-clad vehicle raises curiosity and attracts attention.
(h/t to Michael Lieberman of Book Patrol)
Labels: book art, fascination, libraries, shelves
Email ThisBlogThis!Share to TwitterShare to FacebookShare to Pinterest
No comments:

Russia is for Reading Books, Then and Now

Posted by Jim Watts
The Moscow city government has launched a campaign to encourage reading. It includes placing 100 billboards around the city with the slogan, "Read Books."

The theme is an old one in Russian culture. Michael Lieberman on Book Patrol points out these posters from the Russian Revolution tauting reading as the path to social revolution. The images come from the New York Public Library's digital gallery, "Posters of the Russian Civil War, 1918-1922." 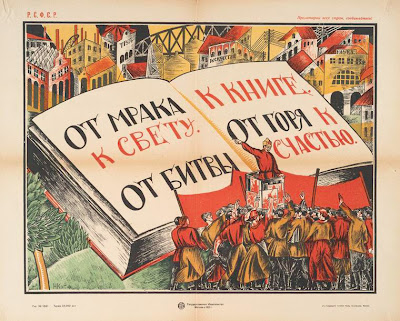 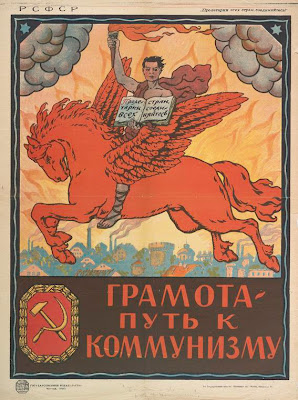 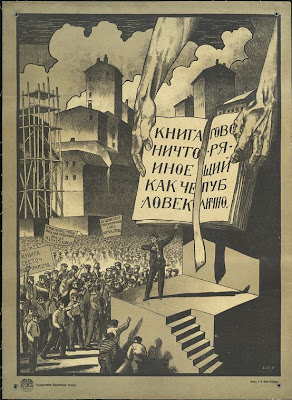 Kniga nichto inoe kak chelovek, govoriashchii publichno. [The book is nothing else than a publicly speaking person.] (1920).
Labels: politics, reading
Email ThisBlogThis!Share to TwitterShare to FacebookShare to Pinterest
No comments: