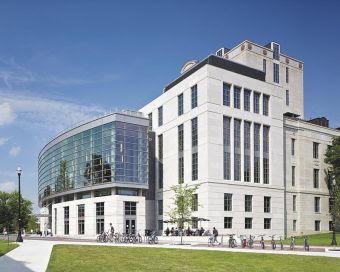 The Chronicle of Higher Education reports that Ohio State's newly completed library renovation pays attention to look and feel as much as utility.

Walk in the door and into the sunlit atrium and look up. You can't miss the central stacks tower, its skin ripped off and replaced with heavy-duty glass. The books inside beckon, and the people studying and milling around them are clearly visible.

... Not long ago, in the earlier, euphoric days of the Internet, college administrators could be heard questioning the role of the library as a physical place on the campus, especially when one could trawl an ocean of knowledge from the convenience of one's own dorm room or office. What's the point of a library building in an interconnected world?

Ohio State's $109-million library project, which renovated some 300,000 square feet of space constructed in pieces over the past 100 years, is about the strongest refutation of that point of view as any, reinforcing the role of the library as a central hub and place of connection. ...


"Clearly the university wanted to signal that knowledge generation, use, and application is a priority of the institution, and there is no better place than in the stature and status of the library," says Mike Sherman, vice provost for academic administration.

... The tower not only is a prominent structure on Ohio State's Oval, the campus's central lawn, but proved to be a fantastic asset to the renovation. Now clad in glass on the first six floors, the tower is a striking feature at the center of the building. Mr. Lee, from Acock Associates, says that the entrances to the building were intentionally designed with low ceilings, so that visitors could not help but look up and see the stack tower when they entered the atria.

"It was a conscious attempt to manipulate you by compressing you and then letting the space really open up," he says.

... Library renovations inevitably lead to greater use of the collections and more visits, and Ohio State's project is no different. The building attracted around 3,000 people daily before the renovation; now 12,000 people walk through the door each day.

Here and there, the designers laid down clues to the intellectual mission of the building, including the "foundation stones," 49 brass plates set in the terrazzo floor, along with 45 panels etched into elevator doors. The plates and panels represent various forms of writing that have been developed over the past 5,000 years. You can walk around the building and find alphabets, syllabaries, and graphic systems representing a host of languages, including Cree and Aztec, the old Irish alphabet Ogham, musical notation for the African drum called a djembe, and even Tengwar, the elvish script invented by J.R.R. Tolkien.

The stack tower is probably the building's most important statement. Ms. Diedrichs says the glass box of the tower serves as a reminder of what the library is for. "It conveys that scholarship and serious study are an important part of a college education and are a central part of the college," she says.

Ms. Diedrichs works on the third floor and takes the stack-tower elevators up in the morning to see what students are doing and what books they are pulling off the shelves. Early one recent morning she had already seen about 20 books lined up in a book truck, ready for reshelving.

"We like to talk about how everything is digital, but it's not entirely," she says. The marriage of study spaces with a prominent place for print is "like being at the intellectual crossroads of our campus," she says. "Students say, 'I am reminded of why I am at the university.'"