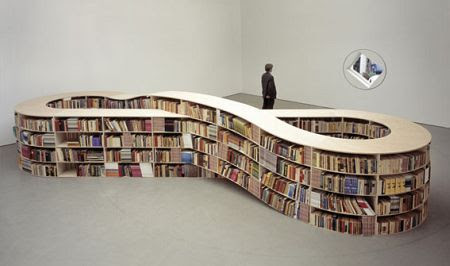 A blog by Lu Terceiro provides a recent series of posts on "book as art object" with pictures of book art installations culled from the WORK site, including this untitled piece by Job Koelewijn (2005).
Labels: book art
Email ThisBlogThis!Share to TwitterShare to FacebookShare to Pinterest
No comments:

Posted by Jim Watts
(Having more to do with the performance of scriptures than their iconicity ...) Iyov has compiled a remarkably long list of MP3 recordings of people reading the Bible in various English translations.
Labels: Bible, performance
Email ThisBlogThis!Share to TwitterShare to FacebookShare to Pinterest
No comments:

Posted by Jim Watts
Thanks to Rare Book News for pointing out this Wall Street Journal article which reports that an art book publisher has five new art books on its fall list priced in excess of $1,000. Leading the pack is Super Yacht, $3,950, with "an Italian-silk cover, protected by a clamshell Lucite case, and 648 color pages, which include rare photographs."
Labels: art history, sales
Email ThisBlogThis!Share to TwitterShare to FacebookShare to Pinterest
No comments:

Posted by Cordell Waldron
One of the traits often attributed to the Bible is the ability to stop a bullet and save a soldier's life. An About.com Internet site documenting urban legends offers quotations reporting this legend at least as far back as 1841 (with one quotation claiming Oliver Cromwell knew about it!), and the latest war continues the tradition. According to a Buffalo, New York, television news broadcast, US Army PFC (Private First Class) Brendan Schweigart's Bible protected him from a ricocheting bullet:

It's the personal story of a Southern Tier soldier who can tell you the Word of God literally saved his life in Iraq! Army PFC Brendan Schweigart tells News 4's Ellen Maxwell how his personal bible stopped a bullet that would have killed him.

"They were cleaning the wound, you know, working on me, and then I for some reason just asked for my bible."

When the 22 year old was handed his bible, he realized the sniper's bullet had stopped there.

More skeptical readers might also be interested in Episode 16 of Season 2 of the cable television show Mythbusters, in which the hosts test the myth by seeing whether or not a book can stop a bullet. (For the most part, it can't.)
Labels: amulets, Bible, bullet, talismans
Email ThisBlogThis!Share to TwitterShare to FacebookShare to Pinterest
No comments:

Posted by Jim Watts
The Guardian reports that Iraqi troops have seized Iraq's national library to use its roof as a military outpost. The library director complains that "They have turned our national archive into a military target." The Guardian's lead line for this story announces that "Thousands of rare books and manuscripts in Iraq's national library and archive, one of the country's most important cultural institutions, are in peril." Jeremy Dibbell on Bibliophile editorializes: "The library building and grounds must be off-limits as a base for military operations, in order to prevent reprisal attacks on it and other cultural institutions."

Of interest from an iconic books perspective is the claim that important libraries and other cultural institutions, such as museums, should be off-limits to military activity. This reproduces in secular language the religious claim that military personnel stay out of shrines and other holy sites. Regard for libraries and museums as secular shrines is, of course, widespread in modern culture, even if recognition of the religious nature of this attitude is not.
Labels: libraries, politics
Email ThisBlogThis!Share to TwitterShare to FacebookShare to Pinterest
No comments:

Other stories feature the floating store as "a floating book store for bibliophiles," "a book fair full of surprises," and "The Biggest Bible on display at Chennai Book Fair." A 2005 story in WikiNews about the ships emphasized that they bring books to people in regions otherwise without access to them.

Beyond the obvious use of iconicly crafted scriptures both as merchandise and as merchandizing display, the ships and the media coverage they willingly receive vividly illustrate how the interest in books in general, and scriptures in particular, reaches across cultural and religious boundaries. Iconic books have therefore always been useful tools for missionary work.
Labels: Christians, exhibits, giant book, libraries, sales
Email ThisBlogThis!Share to TwitterShare to FacebookShare to Pinterest
No comments:

Posted by Jim Watts
Today's New York Times has a long article about Timbuktu's manuscript libraries. The story emphasizes the social and political stakes involved in the city's library project:

A surge of interest in ancient books, hidden for centuries in houses along Timbuktu’s dusty streets and in leather trunks in nomad camps, is raising hopes that Timbuktu — a city whose name has become a staccato synonym for nowhere — may once again claim a place at the intellectual heart of Africa. ...

Timbuktu’s new seekers [investors in the town and libraries] have a variety of motives. South Africa and Libya are vying for influence on the African stage, each promoting its vision of a resurgent Africa. Spain has direct links to some of the history stored here, while American charities began giving money after Henry Louis Gates Jr., the Harvard professor of African studies, featured the manuscripts in a television documentary series in the late 1990s.

The feature includes an audio slide show and links to on online exhibit of Timbuktu manuscripts at the US Library of Congress.
Labels: exhibits, libraries, memory, politics, relics
Email ThisBlogThis!Share to TwitterShare to FacebookShare to Pinterest
No comments:

Posted by Jim Watts
Previous posts have noted furor over desecrating scriptures in many countries, and the issue is again causing controversy in the USA. The arrest of a former Pace University student on hate-crime charges for throwing two Qur'ans in public toilets is generating charges of hypocrisy from many quarters, because similar acts by artists using Christian symbols have previously been defended on free-speech grounds (e.g. Hyscience, NY Post, Front Page; see the response from the Council on American-Islamic Relations).

Far less attention is being given to news that artist Charles Merrill burned a rare and valuable Qur'an. Earlier, he marked and cut up a Bible. He explained his attempt at even-handed desecrations of scriptures as symbolic acts of protest: "The purpose of editing and burning Abrahamic Holy Books is to eliminate homophobic hate."

As I observed in the case of the burning Bible on German TV, attention to descrations of one tradition's scriptures brings increased attention to similar acts in other traditions. The iconic status of a book is not static, but constantly changes. Iconic books provide convenient tools for both giving offense and taking offense, and today's politics gives many people reasons to do both. I expect that people's sensitivities to how their scriptures are being treated will keep rising for a while.
Labels: Bible, desecration, Quran
Email ThisBlogThis!Share to TwitterShare to FacebookShare to Pinterest
No comments:

Posted by Jim Watts
Sikh authorities in Rajasthan, India, are trying to get legislation passed that would grant legal monopolies for the printing of copies of the Guru Granth Sahib, the Sikh scriptures. This effort seeks to guard it from profanation or desecration, which has also been a recent tactic of intra-communal conflict (see Sikhs).

August 8th: The Punjab government announced to day that it would, in fact, "issue an ordinance banning the publication and publishing of the Guru Granth Sahib, the Sikh scripture, by private publishers," according to newKerala.com.
Labels: desecration, Guru Granth, printing, Sikhs
Email ThisBlogThis!Share to TwitterShare to FacebookShare to Pinterest
No comments:

Thanks to Bibliophile Bullpen for drawing attention to this YouTube video of bookbinder Peter Goodwin's describing "brittle book syndrome," with side comments about the advantages of books over electronic media...
Labels: Bible, bindings, printing, technology
Email ThisBlogThis!Share to TwitterShare to FacebookShare to Pinterest
No comments: