The British Library has made available in digitized form online over 70 sacred texts from ancient and contemporary world religions.

The link to the online collection can be accessed for free here.

Notably, the curators of this online resource have included both aesthetic and kinesthetic elements in the display, such as the ability to "turn" virtual pages of the texts, as if flipping through a "real" codex.

These attempts to make virtual texts more "book like" are worth exploring.  They involve resources of time, programming, and storage space--not to mention considerable extra monetary investments in website development.  How well, I wonder, do the curators research the desire, or "need," for this sort of feature before implementation?  Or do they simply assume that these sorts of functionalities are needed to make the site more appealing?

I'd be interested to hear others' thoughts on these questions.

Fourteen years ago, a collection of calligraphy works from the Sakip Sabanci collection toured the United States under the exhibition title Letters in Gold. I vividly remember seeing the show at the Harvard Museums and gaining my first small steps toward understanding the intricacies, splendors, and fascination of Islamic calligraphy.

Since then the Sakip Sabanci "collection" has been established as a museum with its own building on the Bosphorus, a short journey north of the clamor of Istanbul's city centers. The new exhibition, The Arts of the Book and Calligraphy celebrates the tenth anniversary of the Sakip Sabanci Museum (SSM), and wonderfully displays both the significant permanent collection as well as some clever and provocative attempts at weaving old technologies of the book with new electronic technologies. It also, as the acronym of the title implies, gives an "ABCs" of the calligraphic tradition, providing a fabulous education.

I'll be writing a full review for Material Religion to appear later this year, but wanted to post some comments here that show the relevance of the exhibition for those of us interested in iconic and performative texts. 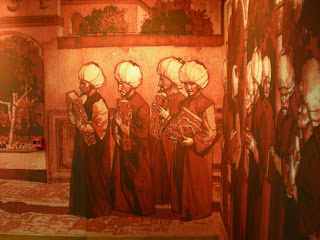 The exhibition is set up to introduce the book as object, an object that is technologically savvy, artistically creative, and pulls its users toward veneration--the latter occurring in part through technology and artistry. A large wall mural at the entrance depicts a line of people bearing gifts for a Sultan; the gifts are all large books (see image above). And so we enter this space that offers audiences an overview of bookmaking, including stitching, binding, cover work, the creation of pens, and ultimately writing and illustrating. Short videos document each of these processes, as finished examples from the Ottoman period are displayed in cases. Other sections of the exhibition focus on specific artistic forms like the hilye, levha, and kit'a. Many examples can be seen at the website.

The museum carries the tagline "Where history meets technology" for its permanent calligraphic collection. I spoke with Ayşa Aldemir Kilercik, the Collections Manager of the museum and co-curator of the ABC show. She tells me that the entire collection has now been digitized and SSM will be making it public as early as this year. This will be welcome news for many of us working on iconic texts.

The exhibition uses technology in one of the better ways I've seen in a museum setting. Visitors are offered an iPad at the beginning, and there are several stylistic QR Codes throughout that offer lighthearted, animated versions of Turkish miniature paintings that highlight the role of the book in various cultural and political settings. Here I am looking at four hundred year old books and illustrations through an iPad, and then taking a picture of the process (and you, reader/viewer, are adding another layer). 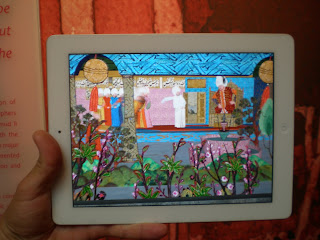 What struck me from a technological-textual perspective are the various objects that had been scanned at high resolutions. I was able to view the "original" object behind the glass case, then look at the screened version on the iPad. The iPad sometimes would then include translations, and further information, such as the image below shows. Of course, I wanted all the information, all the translations about all the objects. I found myself looking at the object, then studying the screen for close ups, then going back to the original object. The activity heightened my sense of engagement with the object itself, and shows the future of museum viewing as well as new technological engagements with books. 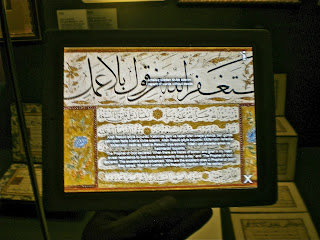 Yet even with the limited number of works available now in full interactive form, the promises of such interactive technology are encouraging. The labor to do this is time intensive, and I wonder if we might develop new guilds--not just a programmers--that create these interactive works, creators who understand the texts, but also how to creatively put them in new forms, surrounded by new information settings.

One thing is clear: technology must be seen on a historical continuum. The making of books four hundred years ago is every bit as technologically sophisticated as the new iPads, every bit as interactive, creative, and sensually rich as video screens and digital manipulations. And so the future of the book rests not in its eclipse but in its resituation, its continual remediation.

Park yourself with a good book 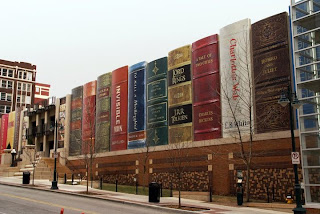 Many on this blog have noted the ways in which books are presented in various ritual and statuary fashions in our culture.  Here is one example that has been making the rounds of facebook this week.  The photo, attributed to Jonathan Moreau, shows the side of a Kansas City parking garage, adorned to look like a shelf of books.

What struck me, when I saw it, was not just the "larger than life" depiction, but also the choice of books to be depicted.  I can't make out all the titles, but clearly visible are The Lord of the Rings, To Kill a Mockingbird, Romeo and Juliet, A Tale of Two Cities, Charlotte's Web, and Invisible Man.

So I find it interesting that books would be depicted, but also that these books (in many ways, a list of "usual suspects"--an accepted canon) would be chosen.  Not even the books, but the book spines, hold an iconic status in this case.

Posted by Jim Watts
I'm delighted to announce that the papers from the Iconic Books Symposia have now been published in a thematic triple issue of Postscripts. Here's the table of contents: