Ark of the Covenant in Zimbabwe 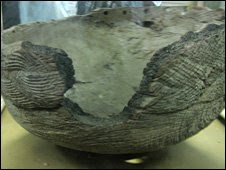 The Ark of the Covenant--that fabled container of the most iconic of texts, the Ten Commandments--has had considerable impact on the folklore and practices of several African peoples. Now the BBC reports that a replica of the ark that is possibly 700 years old has been placed on display in Harare, Zimbabwe.

The "ngoma lungundu" belongs to the Lemba people - black Africans who claim Jewish ancestry. They say the vessel was built almost 700 years ago from the remains of the original Ark ...

Tudor Parfitt, who rediscovered the artefact three years ago, told the BBC he believed it was the oldest wooden object ever found in sub-Saharan Africa.

"On each corner there is the remnants of a wooden ring, and obviously at one point, it was carried by inserting poles through these two rings on either side," he said.

"Of course in the biblical account, that's precisely how the Ark of the Covenant was carried across the wilderness."

The BBC's Steve Vickers in Harare says the vessel was unveiled to great fanfare at the city's Museum of Human Science.

Lemba leaders from across Zimbabwe attended the ceremony, along with government ministers.


This ceremony demonstrates once again the political as well as ethnic legitimacy that can be at stake in the preservation and display of iconic texts, or their reliquaries.
Labels: boxes, exhibits, legitimacy (ethos), politics, relics, Ten Commandments
Email ThisBlogThis!Share to TwitterShare to FacebookShare to Pinterest