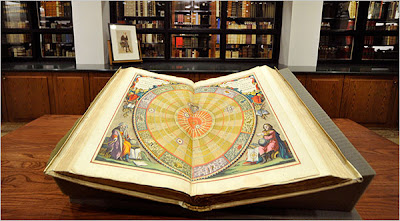 the “Harmonia Macrocosmica,” Andreas Cellarius's 1661 star atlas, is among the rare books visitors can find at the Linda Hall Library in Kansas City, Mo.
... The Linda Hall is among dozens of libraries across the United States that house dazzling collections and often mount eccentric exhibitions but largely remain unfamiliar to the public.
... Many libraries, whether public or private, are the passionate inspirations of their founders.


But the article also documents the bibliophilia of the librarians, and the journalist:

Sometimes a visitor is even allowed a peek behind the scenes. On a recent visit to the New York Academy of Medicine Library, I was taken to the conservation floor, where two women were at work in a sunny room overlooking Central Park. Among the works they let me handle was a ninth-century copy of a cookbook by Apicius. Though it is the earliest cookbook in the West, almost nothing is known about Apicius himself. Both women were lawyers who quit to become librarians. At that moment, that seemed like a lovely idea to me.