A House for the Mind 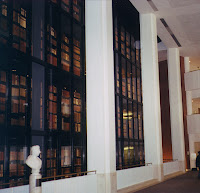 The driving force for the library was his own bookishness. Colin (always known as Sandy) St John Wilson was born in 1922, the year of Ulysses and The Waste Land, Wittgenstein's Tractatus, Mandelstam's Tristia and the last volume of Proust. For him, an ideal library had a certain aura close to that of the solemn sacred spaces of the Anglican churches and cathedrals he grew up in. His father was a notably radical bishop of Chelmsford and an expert on the 17th-century Divines. He was brought up understanding that books were a protected species and libraries were bastions of intellectual freedom. As he wrote: "One has only to recall the destruction of the library in Alexandria or, akin to that fire, the blasphemy that underlay the burning of the books by Nazi decree, for one to be aware that the library and what it houses embody and protect the freedom and diversity of the human spirit in a way that borders on the sacred."

His first ambition would have been to build a great cathedral, but a library came second. He retained a childlike vision of a "magic mountain of all the knowledge in the world".

Pallant House Gallery in Chichester is exhibiting Wilson's art collection in a gallery that he designed, and reflects on his career in the exhibit, "Colin St John Wilson: Collector and Architect."