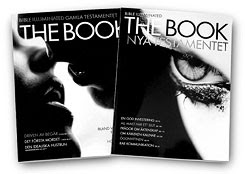 Graphically innovative Bibles do not just appear in the style of graphic novels and comics, manga or otherwise. The Wall Street Journal reports on The Bible Illuminated:

The Swedish-language Bible marries the standard text to glossy magazine-style design. Full-color pages are illustrated with a striking combination of news and dramatized photographs: a homeless child wrapped in a sweater on the streets of Bogotá, Colombia, illustrates the book of Job; a man who drowned trying to enter Europe, for Deuteronomy; and models posing in stylized scenes convey joy or despair. Bible passages are pulled out as captions.

... "There are 40 million [glossy] magazines sold each year in Europe," says Dag Söderburg, creative director at the edition's Swedish publishers, Förlaget Illuminated. "But the Bible, a literary treasure, stays on the bookshelf."

The work is aimed not at a religious audience but rather at readers concerned with ethical and philosophical questions surrounding issues such as global warming and religious fundamentalism.

The article also mentions other bibles in various graphic formats, including Thomas Nelson's glossy magazine version aimed at teenage girls. It notes that such innovative publishing formats have aroused little religious controversy, either in Sweden or America.

That observations stands in stark contrast to the media attention some of these innovations get (see my previous post about manga bibles). There seems to be a disjunction between what the media think Christians should find outrageous, and the indifference that actually meets such marketing ploys. In fact, innovative marketing of Bibles is often applauded as Christian outreach, just as the Swedish publisher presents it. In the case of the Bible, at least, the book's iconic status seems unaffected by its ever changing formats.