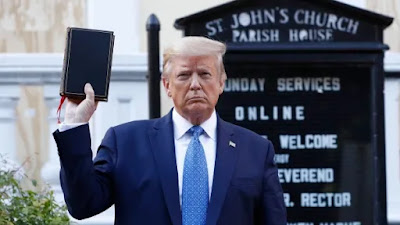 Yesterday, troops and police used force and tear gas to clear a path through protestor for Donald Trump to walk from the White House to a nearby Episcopalian church, which had suffered some damage from the protests. There, he posed for photographers while holding up a Bible. He did not give a statement or speech there, and hardly spoke at all.

Trump’s performance was an attempt to gain legitimacy by associating himself with the Bible and with the Church. His picture in front of a church building damaged by a small fire cast Trump in the pose of a “defender of the Church,” a traditional self-characterization of Christian kings and generals to justify their bloody violence.

Trump’s pose holding up a Bible was something more. By manipulating a Bible, he legitimized himself by association. Manipulating a physical book of scripture associates a person with its message and with the religious tradition that it represents. Holding a Bible is a way to portray oneself as Christian, as pious, and as religiously orthodox. This pose is readily recognizable because of its use in Christian art for thousands of years. It does not need verbal commentary to communicate.

Politicians traditionally manipulate bibles or other scriptures at their inaugurations. Yesterday, Trump reasserted God’s support for his presidency with a few simple pictures. To his opponents, like me, these pictures look simplistic, clumsy, and artificial. But they may well be politically effective.

Scholars have often complained that manipulating physical scriptures is a misuse of them. Their complaints usually fall on deaf ears. While people readily ask experts to interpret the meaning of a biblical verse, they don’t need them to understand the symbolism of a book of scripture. They touch and hold their iconic books to feel comforted, protected, and legitimated. Trump’s pose with a Bible was calculated to communicate viscerally to everyone who holds their own bibles close. That is a lot of people.