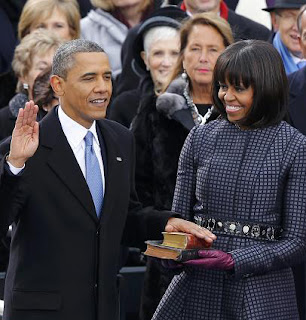 We could take time and space to interpret its significance, but the power of ritual and symbolic imagery lies in making such claims without using words. Obama identifies himself in this way with Lincoln and King. West contests the taming of King's legacy for good reason, but I doubt even his rhetoric has much chance against the legitimizing claim expressed by this photograph.
Labels: Bible, legitimacy (ethos), oaths, politics
Email ThisBlogThis!Share to TwitterShare to FacebookShare to Pinterest