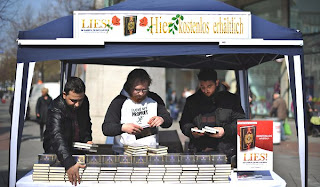 An interesting feature of iconic books is that the most cherished books may be given away free. This commonly occurs with scriptures and usually elicits little comment. But when a conservative Salafi Muslim organization began giving away free Qur'ans in Hanover, urging passersby in German to LIES! "read!", it drew media coverage and political outrage. The New York Times (April 16) reported:


The campaign to hand out the Korans drew nationwide attention — and widespread condemnation — last week after journalists who had criticized the effort were threatened in an online video. And on Monday, the interior minister in Hesse, a state in central Germany, called Mr. Abou-Nagie and his followers “pied pipers” and said that the danger from radical Islam had reached “a new dimension.”

Here again, for both Muslims and non-Muslims, the book has become the emblem for the religious community and everything that people think it stands for.
Labels: identification, politics, Quran
Email ThisBlogThis!Share to TwitterShare to FacebookShare to Pinterest