Posted by Jim Watts
This fall brought several news storis showing that libraries--respositories of material books--continue to function as powerful symbols of the ideals of free thought, empowerment and counter-culture. The most obvious example was ﻿the "People's Library" that sprang up at the Occupy Wall Street protest in New York and was frequently highlighted in news coverage of the event. 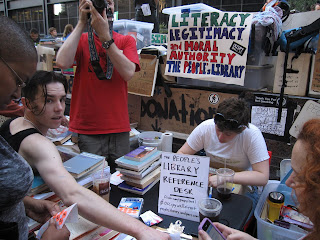 This picture (from The People's Library, scroll down to October 11) captures much of the library's symbolic interest. "Literacy, Legitimacy and Moral Authority" reads the sign above the donations box. The media interest reflected the sentiment that the library was somehow representative of the movement. After police evicted the protestors, ruined books were displayed in front of the New York Public Library to portray repression of the movement (from The People's Library, scroll down to November 20). 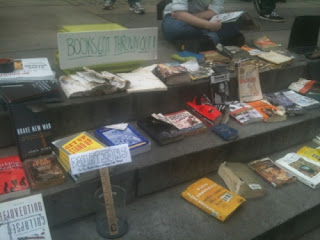 Michael Lieberman posted pictures on Book Patrol showing the book theme in the protestors' signs, too.

The theme of libraries as tools of empowerment and liberation also appeared in the New York Times' story about the Read/Write Library's new location in Chicago:


Formerly known as the Chicago Underground Library, Read/Write rejects the selectivity of traditional libraries and collects “anything from university press to handmade artists’ books to zines made by 13-year-olds,” Ms. Taylor said. “We want to give people a much broader sense of who’s out there.”

That is rhetoric more frequently associated with the internet, but here motivating an all-volunteer effort to preserve and present a material collection. 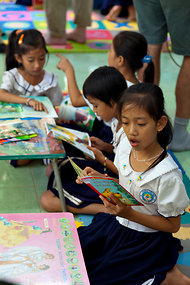 The Nicholas Kristof in the NYTimes also highlighted work to extend literacy by founding libraries around the world:


John Wood handed out his 10 millionth book at a library that his team founded in this village in the Mekong Delta — as hundreds of local children cheered and embraced the books he brought as if they were the rarest of treasures. Wood’s charity, Room to Read, has opened 12,000 of these libraries around the world, along with 1,500 schools.

Kristof makes the virtues of literacy very clear: "Schooling is cheap and revolutionary. The more money we spend on schools today, the less we’ll have to spend on missiles tomorrow."

These stories illustrate the fact that books and libraries continue to function as powerful material symbols of people's hopes for a more equitable, enlightened and peaceful world.
Labels: ideals, libraries
Email ThisBlogThis!Share to TwitterShare to FacebookShare to Pinterest