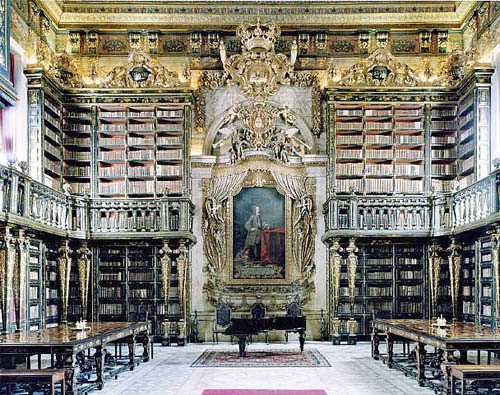 that feeling of "temple of learning" with which libraries have often been identified. On the other hand, the meticulous attention to detail, hand-painted porcelain markers, ornately carved bookcases, murals, stained glass windows, gilt moldings, and precious tomes are an eloquent representation of libraries as palaces of learning for the privileged. In spite of that, and ever since libraries became public spaces, anyone, in theory, has access to books and the concept of gain or monetary value rarely enters the user's mind.

Libraries are a book lover's paradise, a physical compilation of human knowledge in all its labyrinthine intricacy. With digitization, libraries gain storage capacity and readers gain accessibility, but they lose both silence and awe. Even in the digital context, the basic concept of the library as a place for the preservation of memory remains, for many "enlightened" readers the realization that human memory and knowledge are handled by for-profit enterprises such as Google, produces a feeling of merchants in the temple, a sense that the public interest has fallen, one more time, into private hands.

Comparison with Curious Expeditions' collection photographs of libraries (see previous post) makes me, however, think less in terms of a public-private distinction than the sacred-secular one evoked by the phrase "temple of learning." The ornate decorations of these libraries resembles ecclesiastical architecture, and that holds true whether the library is truly private or governmental or academic or really public (e.g. the New York Public Library, the British Library reading room, the Carnegie academic and public libraries all over the U.S. built in neo-classical style, etc.). The architecture effectively conveys a feeling that books and the knowledge they contain are something "set apart," that is, sacred or holy. Google books, on the other hand, conveys nothing of that, to me at least. There are attempts, however, to give at least some iconic texts in electronic form a semblance of a such an aura (e.g. the British Library's "Turning the Pages" web displays, Bible's on DVD that reproduce codex images, etc.). I suspect such efforts will not only continue, but become stronger and more sophisticated as publishers of e-materials (both for-profit and non-profit, secular and sectarian) try to appropriate the iconicity of bound books for their electronic products.
Labels: exhibits, libraries
Email ThisBlogThis!Share to TwitterShare to FacebookShare to Pinterest