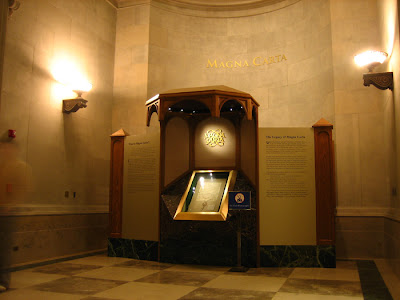 Lincoln Cathedral has loaned its copy of the Magna Carta to the National Constitution Center in Philadelphia for a three-week exhibit, starting July 4th. (The Center has put an English translation of it online.)

It will be interesting to see how the Center displays the document. I've been struck by the very different treatment accorded iconic political texts in the United Kingdom and the United States. The British Library in London displays its two original copies (of the four extant) of the Magna Carta in its room of "Treasures," exhibited on a par with several dozen other rarities such as the Leningrad Codex of the Hebrew Bible, the original manuscript of Beethoven's Ninth Symphony, etc. (And it puts electronic fascimiles of many of them on-line: the Magna Carta is here.)

The U.S. National Archives in Washington, by contrast, displays the fourth original copy of Magna Carta alone in an alcove (see my photograph above) off to the side of the Rotunda that houses the Declaration of Independence and the U.S. Constitution--not nearly so grand as the Rotunda itself (see picture in previous post) but an elaborate iconic display nonetheless that emphasizes its uniqueness much more than the British Library's rather documentary approach.

The American emphasis on the iconicity of founding national documents reflects how much the U.S. government stakes its political legitimacy on being "Constitutional."
Labels: constitution, Declaration of Independence, exhibits, law, Magna Carta, politics
Email ThisBlogThis!Share to TwitterShare to FacebookShare to Pinterest