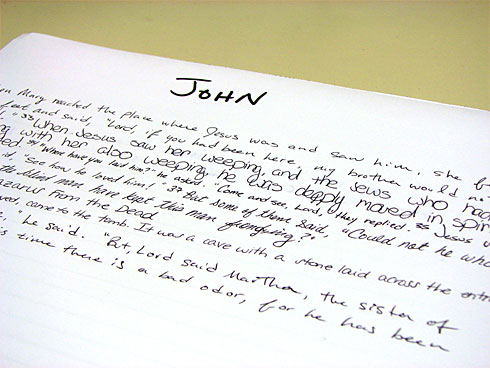 To mark the 30th anniversary of the NIV, which has sold 300 million copies worldwide, publisher Zondervan launches a campaign today to create the unique edition, which will include its 31,173 verses, each handwritten by a different person.

A huge blue RV with the logo "BibleAcrossAmerica.com" splashed on its side and "Inspiration at every turn" on its back takes off on a five-month journey bringing "writing stations" to 90 stops in 44 states at churches, landmarks and popular settings such as NASCAR races.

So to celebrate one of the greatest successes of mass printing and marketing, they create the precise opposite, a unique manuscript! Of course, the marketing potential in both the unique copy and mass reproduction are not being ignored:

A photo facsimile of all the verses will be compiled and published in time for Christmas 2009; the index will list each participant's name and the number of the verse he or she copied.

One set of originals will be bound and offered to the Smithsonian. The second set, also bound, will be auctioned to benefit the International Bible Society, which holds the NIV copyright and is co-sponsoring the project with Zondervan.

Meanwhile, the American Bible Society has produced a limited edition polyglot Bible for use by the Vatican:

One of the things highlighted in the working document for the Synod of Bishops is the importance of Lectio Divina within the Catholic tradition. Lectio Divina, a dynamic centuries-old method for Bible reading and reflection, is an integral part of the devotional life of the Catholic Church. The American Bible Society currently conducts Lectio Divina workshops and training sessions in Catholic parishes around the country.

The 3200 page Bible took biblical scholars at the American Bible Society over a year-and-a-half to complete. Dedicated to His Holiness Pope Benedict XVI, the leather-bound volume is embellished with gold and silver titles. Brazilian artist Claudio Pastro, a specialist in Sacred Art, provided the artwork.

All those attending the Synod will receive copies of this Bible. An additional one thousand copies of the Biblia Polyglotta will become the official biblical gift of the Holy See to heads of state and other dignitaries.

The unique commemorative edition has a very old history in Bible production. Both these efforts show it is alive and well. But it is also very interesting to see both publishers showing interest in the performative dimension of the text, whether the hand writing of the verses or the meditative reading/chanting through lectio divina. This is a big change for these very text-centered organizations!
Labels: Bible, copying, fascination, memory, performance, sales
Email ThisBlogThis!Share to TwitterShare to FacebookShare to Pinterest