Posted by Jim Watts
Penguin has published Ammon Shea's The Phone Book: The Curious History of the Book That Everyone Uses But No One Reads. I will be interested to read it, since I have often used the phone book as my best example of a completely un-iconic book: it is ritualized neither in the semantic dimension (the point of Shea's subtitle) nor in the iconic or performative dimensions. Despite being an instantly recognizable feature of 20th century culture (and so "iconic" in the popular sense of the term), the phone book's lack of ritualization makes it vulnerable to electronic replacement.

Posted by Jim Watts
The Museum of Biblical Art (MOBIA) in New York has opened an exhibit, A Light to the Nations: America's Earliest Bibles (1532-1864), consisting of 29 volumes and historical items.

(h/t Sam Gruber)
Email ThisBlogThis!Share to TwitterShare to FacebookShare to Pinterest
No comments: Links to this post

Posted by Jim Watts
Earlier this month, Brandeis University hosted a conference on "Patronage and the Sacred Book in the Medieval Mediterranean."

The interest of this conference is twofold: the patronage of sacred texts in comparative contexts and the role of inter-religious elements in the production of sacred texts. The participants will address the adoption of book-making techniques across religious boundaries, Jewish/Christian/Muslim collaborative translations of art/text productions, interest in reading, producing, or interpreting the sacred texts of other religious traditions, and other related questions.

(h/t Claudia Rapp)
Email ThisBlogThis!Share to TwitterShare to FacebookShare to Pinterest
No comments: Links to this post

Alexander Korzer-Robinson has put a gallery of his sculptures made from books online here.

(h/t Andrew McTyre)
Labels: book art
Email ThisBlogThis!Share to TwitterShare to FacebookShare to Pinterest
No comments: Links to this post

Posted by Jim Watts
Jill Hurst-Wahl attended the third Iconic Books Symposium and wonders about the social effects of iconic books on her blog, Digitization 101:

Does the iconic value of the book keep us tied to this medium more than we should be? Is our move toward other ways of transmitting information being inhibited by our connection to the book as a representation of knowledge? 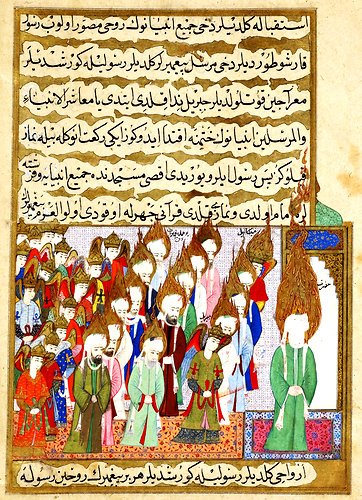 First there was Torah, Bible, Coran: Livres de parole at the Bibliothèque nationale de France in 2005, then Sacred at the British Library in 2007. Now there is Three Faiths: Judaism, Christianity, Islam at the New York Public Library. This series of exhibits comparing amazing manuscripts and printed books from each of the three Western religions represents a concerted effort to demonstrate what they have in common. "These exhibitions have a distinctive post-9/11 cast," observes Edward Rothstein in the New York Times.

The British exhibition even had the subtitle “Discover What We Share.” And
in New York, too, the emphasis throughout is on commonality. At this historical
moment, this is meant to defend Islam against anticipated accusations.

But the exhibits and, especially, their online promotions linked above also demonstrate how libraries are using electronic media to publicize their treasures. In New York, images from the exhibit will even be projected on the side of a Fifth Avenue building . These electronic texts, far from obscuring the physical books, celebrate and revel in them. They broadcast their iconic, even monumental, status and draw crowds to see the material objects themselves.
Labels: Christians, exhibits, illuminated texts, Jews, Muslims, relics, technology
Email ThisBlogThis!Share to TwitterShare to FacebookShare to Pinterest
No comments: Links to this post

Posted by Jim Watts
Last week, I was privileged to address the Oreck-Alpern Interreligious Forum hosted by the College of St. Scholastica in Duluth, Minnesota, on the subject of "Scriptures in Three Dimensions," the first event in this year's series, "Exploring Sacred Texts."

Posted by Jim Watts
The third Symposium on Iconic Books was a great success! Claudia Rapp has written an insightful synopsis and analysis of the papers and discussion, which now appears on the Iconic Books website. She approves that the symposium brought together scholars from diverse fields: "Comparative studies are most successful when undertaken in dialogue as it reveals the strangeness of things that had been taken for granted."
Labels: conferences
Email ThisBlogThis!Share to TwitterShare to FacebookShare to Pinterest
No comments: Links to this post 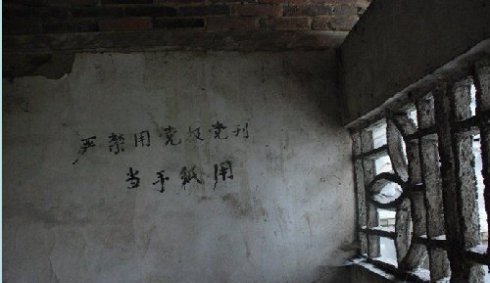 He translates: “Use of Party newspapers and magazines as toilet paper is strictly forbidden.”
And comments: "It is evident that some types of paper with writing on it are more precious than other kinds. In old China, one was not to wrap fish or wipe oneself with any paper that had writing on it, because writing itself was to be respected, no matter what the content or who the author was."
(h/t to Ayse Tuzlak)
Labels: desecration
Email ThisBlogThis!Share to TwitterShare to FacebookShare to Pinterest
No comments: Links to this post

Posted by Jim Watts
Labels: technology
Email ThisBlogThis!Share to TwitterShare to FacebookShare to Pinterest
No comments: Links to this post