Illuminated Books in the 21st Century (4)

Posted by Jim Watts
It’s not just the Bible producers discussed in my three previous posts (here, here, and here) who are re-imagining the illuminated manuscript for the 21st century. Other publishers employ striking visuals to get their books noticed and their contents read. We’ve already mentioned the lavish photographs illustrating Harun Yahya's Atlas of Creation that has kept this creationist tract out of many recycle bins, as well as the respect that comic books garner by taking traditional codex “book” form (see Cordell Waldron’s comment to the post on Yahya).

Illuminated manuscripts are the iconic books of our past. A Renaissance of iconic books will be one of the first signs of our Awakening. Iconic books invite us to let go of our egos and open our hearts to God. ...

A moderate book need not be moderate in its Beauty. Moderate books written by people with moderate views should be the best-looking. ...

Iconic books are conversation triggers. “What do you see?” they ask. “And what does it mean?” We are at the dawn of a Great Conversation.

To create iconic books and believe that they can really make a difference is what it means for people in the book world to "Give the impossible a go!" as Tony Blair likes to say.

Alberti’s motives echo precisely those behind the St. John's Bible and the Bible Illuminated. His texts, though, are much shorter, such as a speech by Tony Blair on “Faith and Globalization.” 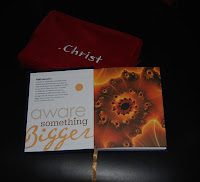 Each double-page spread contains only twenty to sixty words of text, juxtaposed with full-page fractal images. Single words and word-fragments in a wild array of fonts catch and focus attention. The small volume is hard bound in a blue velour cover with gold lettering, and comes inside a red-velour zippered pouch with “.Christ” stitched on it. As Mr. Alberti wrote to me, “In this age of information overload, a short book has the best chance of getting read and having maximum impact.” He produces limited-edition works on commission. Like Yahya, he puts words in a form that is hard to ignore.

Even some digital media advocates have been infected with nostalgia for illuminated manuscripts. According to Christ Meade, if:book london is launching a joint project with the Arts Council of England

to create an illuminated book online, containing the poetry of William Blake, new writing, art and song inspired by Blake’s work, and the voices of many readers as they debate some of Blake’s key concerns and their relevance in the digital age. ...

Songs of Imagination & Digitisation will involve working with a range of those people, commissioning new writing and art, providing incentives for new voices to submit work and for readers to give us their ideas. We will mingle film, text and image, reader response and author interviews – and once we’ve gathered enough ingredients on our blog we hope to transmute them into something that feels like a proper, substantial, networked book. ...

We want the Songs to be a springboard into all kinds of reading.

Meade’s rhetoric speaks of “inspiration” at both personal and public levels, very similar to the language of Alberti and the people behind the St. John’s Bible and the Bible Illuminated. Once again, though the aesthetic paradigms to which they subscribe and the media they use diverge sharply, the same underlying model (the medieval illuminated manuscript) and motivations (personal transformation and public appeal) seem to be fueling quite a trend. I hesitate, though, to call it a “new” trend: people have been doing similar things for similar reasons for a very long time and I see little evidence to support the notion that modern print culture every suppressed this impulse (but for the contrary view, see the publicity for this book on Alberti’s website).
Labels: book art, ebooks, fascination, illuminated texts
Email ThisBlogThis!Share to TwitterShare to FacebookShare to Pinterest