The presidential candidates' rival town halls were most interesting to me for their very different choices of iconic staging. While Donald Trump's stage featured a huge star on a circular red field, reminiscent of Captain America's shield, Joe Biden chose to portray himself with a picture of the U.S. Constitution as a backdrop, located in the National Constitution Center in Philadelphia. 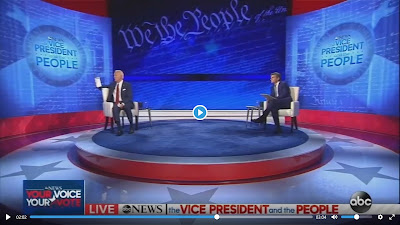 The calligraphy of the Constitution's opening phrase, "We the People," is iconic in American politics. Its reproduction often appears in left-wing and right-wing protests and its iconography can be touted by conservative pundits. President Barack Obama, with whom Biden served as Vice President, gave a memorable speech about closing the Guantanamo Bay prison camp while standing in front of the Constitution's manuscript in the rotunda of the National Archives.

So Biden's staging not only represents his fidelity to the rule of law in implicit (and often explicit) contrast to the current President. It may also be evoking his connection to Obama, which he regularly highlights.