The Shape of the Decalogue Tablets 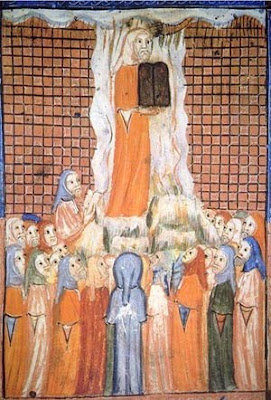 Menachem Wecker in the Jewish Press surveys the shape of the Decalogue in Jewish art, especially late medieval illuminated manuscripts. Though the stereotypical round-topped double tablets appear in the Sarajevo Haggadah (right, ca. 1350), he also finds rectangles, single tablets, and framed texts. No standard shape or depiction carries the day, though Wecker observes that

the claim Jews envision the tablets in the rectangular while Christians hold them to have been rounded does not stand. For the most part, Jewish artists do seem to have followed the grammar of the biblical phrase luchot avanim (tablets of stone) or luchot ha'brit (tablets of the law), which is always presented in the plural, while many Christian artists attached the two tablets to each other. 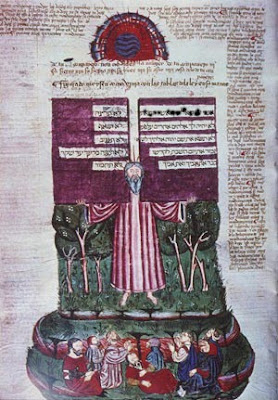 Perhaps the most interesting depiction is in the Alba Bible (left). Wecker comments:

The tablets seem positioned to squash Moses' head, and if one examines them carefully, one notices that the text - which is not carved into the rock, but painted on top of it - sometimes overflows the allotted space and hangs midair, particularly in the third commandment. It is almost tempting to read the white space surrounding the letters as empty space, in which case the artist has interpreted the forms of the letters as all being miraculously suspended.
Labels: art history, illuminated texts, Jews, Ten Commandments
Email ThisBlogThis!Share to TwitterShare to FacebookShare to Pinterest

Thanks for linking my article!