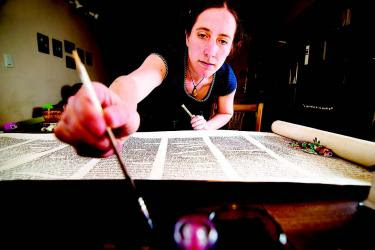 Jen Taylor Friedman, a Jewish woman in the Bronx, has mastered the skills of a Torah scribe and already completed two scrolls, according to the Riverdale Press:

Many consider Ms. Friedman, 29, an important feminist figure, holding her up as a pioneering example to young Jewish women. Other Jews, primarily in the Orthodox community, believe she is out of bounds, doing work meant only for men or — in the case of Tefillin Barbie — simply inappropriate.

Now, as she undertakes a third Torah, she is still adjusting to her role as lightning rod in the Jewish community. She’s been named to the Forward’s list of 50 influential Jews and, just last week, to Jewish Week’s list of 30 influential Jews under 30.

What that story does not say is that opposition to women scribes stems, at least in part, from the traditional purification rituals required of Torah scribes. Many believe that women cannot maintain the purity necessary to complete a scroll, a task that usually takes nearly a year. The issue, then, is not about skill and ability, but rather about the sanctity of a Torah scroll itself. However, the positive attention being shown Ms. Friedman also employs the legitimizing function of an iconic scripture, in this case to legitimize efforts for gender equality by putting a scribe among a select group of "influential Jews."
Labels: legitimacy (ethos), rituals, scribes, Torah
Email ThisBlogThis!Share to TwitterShare to FacebookShare to Pinterest