Posted by Jim Watts
A dispute over ownership of four Torah scrolls has spilled out of the confidential confines of Jewish courts into Los Angeles District court, reports the Jewish Journal. The case pits a rabbi's widow, who claims the scrolls belong to her, against the rabbi who succeeded her husband who claims the scrolls belong to his congregation. 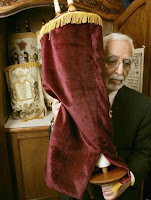 The case raises interesting questions regarding the Torah's iconic status as something more and different than just another book. The congregation's current rabbi,

Ohana disputes the very notion that the scrolls belong to Pauker, questioning whether they ever were family scrolls. Besides, he said, Torahs are owned by a community, not by a rabbi, a donor or anyone else. 'Sifrei Torah are not like money to change hands'.


(picture of Ohana from the LA Times)
He is refusing to accept the decision of a rabbinical court which disagreed with him and decided the case in favor of Mrs. Pauker. This pitting of community interests versus private ownership is reminiscent of the struggle to gather the fragments of the Aleppo Codex that remain in private hands.

April 9, 2009: The LA Superior Court judge reversed the rabbinical court's ruling and has awarded the scrolls to Rabbi Ohana and his congregation, according to the LA Times.
Labels: ownership, sales, Torah
Email ThisBlogThis!Share to TwitterShare to FacebookShare to Pinterest