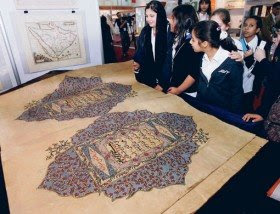 The third largest Quran in the world was sold in Abu Dhabi on Tuesday on the first day of the Abu Dhabi International Book Fair.

The manuscript which is 80cm by 120cm was displayed in the Antiquarian Book Fair which is being hosted for the first time at the event. The Quran, which was produced in 1890 in Indonesia, came about as a result of a request from wealthy people in Arabia. Indonesian calligraphers were known at that time for their high quality artwork, Ebergard B. Talke, a German antiquarian who was selling the Quran told Gulf News.