Posted by Jim Watts
Campus Grotto has produced a list and pictures of the "Most Beautiful Campus Libraries" (reproduced as a top-ten list by Huffington Post). It is limited to U.S. colleges and universities. Nevertheless, it is obvious that the list is dominated by architectural styles inspired by European religious traditions: most are either Gothic or Neo-Classical.
Yale's Stirling Library exhibits the extreme end of this tradition, with its circulation desk dominated by an icon of personified wisdom surrounded by the seven liberal arts. 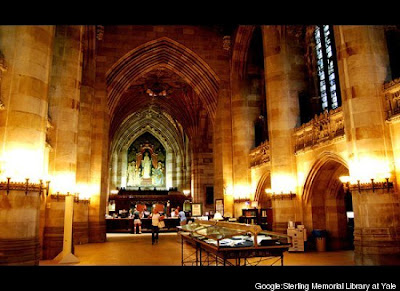 But Yale also hosts the most stunning modernist library architecture, the Beinecke Rare Book Library, whose glass-enclosed climate-controlled cube within an alabaster exterior cube displays the books themselves as the objects of veneration. 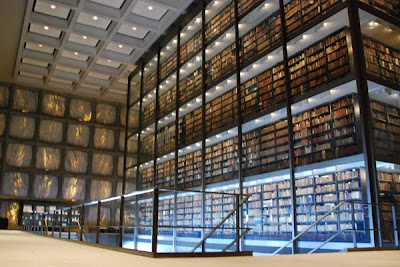