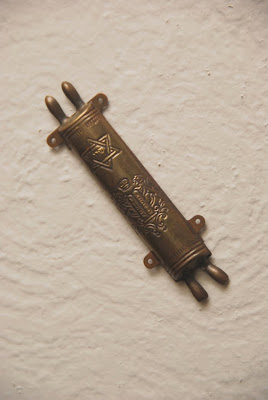 A recent New York Times article about mezuzahs left behind in apartments after their Jewish residents move out points out one very good illustration of how the iconic dimension of sacred texts is often venerated and manipulated across religious lines:

The doorways inside 30 Ocean Parkway, an Art Deco building in Windsor Terrace, Brooklyn, are studded with mezuzas of all sizes and styles: plastic, pewter, simple, gaudy, elegant.

The people behind those doors are an assortment, too: Catholics, Baptists, Episcopalians, Buddhists, atheists and even a few observing the High Holy Days this week.

... Jews have left their mark on every aspect of New York life, but perhaps none are so ubiquitous and tangible as the palm-length encasements attached to countless doorways. So in a city that both savors history and likes to shake things up, it is perhaps inevitable that many of those mezuzas now belong to gentiles.

Left behind when Jewish residents died or moved out, they have survived apartment turnovers, renovations, co-op conversions, paint jobs and other changes wrought by time.

... Jews leaving a home are expected to leave the mezuzas behind if they believe the next residents will also be Jewish. If not, they must take the mezuza with them, to guard against the possibility that a non-Jew might desecrate it, knowingly or not. If a mezuza becomes too weathered, dirty or otherwise damaged, it is to be buried, as are all sacred documents, a service that a rabbi or synagogue can facilitate.

Non-Jews, naturally, are not bound by these customs, but many follow them out of deference. Alex Cohen of Borough Park, Brooklyn, who sells, installs and inspects mezuzas under the business name Mezuzah Man, said he had answered calls from non-Jews asking him to remove their mezuzas. The mezuzas should be handled respectfully, he said: “You don’t just put it in the garbage.”

But many gentiles choose to keep their piece of Judaica in place. “It’s good karma, if I can mix my religious metaphors,” said Brian Hallas .... The prospect of such a paint scar is what kept Eleanor Rodgers from removing the mezuza from the doorway of her home on Albemarle Road in Brooklyn, in a heavily Jewish neighborhood. “We’re not only not Jewish, we dislike organized religion,” said Mrs. Rodgers, a doctor’s receptionist who grew up in Ireland.

... But the idea does not sit right with some observant Jews who see the mezuza as an important emblem of Jewish identity. “To me, it’s very offensive,” said Sara Sloan, a retired schoolteacher in Windsor Terrace. “It’s taking my custom.”

... Still, Connie Peirce, 87, a retired secretary and Catholic who lives in Peter Cooper Village in Manhattan, said she often wished she had inherited a mezuza like many of her non-Jewish neighbors did. The tradition recalled her youth, she said, when her local priest appeared each Easter to write “God bless this house” on her family’s front door.

To her delight, one of her Jewish neighbors recently hung a mezuza on her doorway. “Every time I come home and remember, I kiss it and touch it and then I bless myself, saying, ‘In the name of the Father, the Son and the Holy Spirit, Amen.’ ”