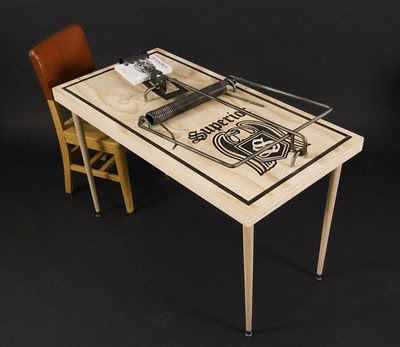 Nancy Mattoon on Book Patrol describes the exhibit, "Speaking Volumes: Transforming Hate" which opened January 7th at the University of Montana's Mansfield Library. She provides an excellent analysis of the controversy over it. The books in question were written by white supremacist Ben Klassen (died 1993) and circulated by his Church of the Creator. When 4000 copies fell into the hands of the Montana Human Rights Network, they commissioned area artists "to provoke discussion about racism, anti-Semitism, and intolerance."

Works created for the exhibit include a re-edit of one book's text by Charles Gute, which reverses the original message; a short story--which completely ignored the books-- about racism written and illustrated by children's book author Faith Ringgold; a book with every word individually cut out, leaving only a lacy, white series of spider-webbed pages by Ariana Boussard-Reifel; and “Hate Begins At Home,” a 10-by-10-foot house constructed from the books--nearly 3,000 of them-- by Dana Boussard.

This year's debut of the expanded exhibit has drawn fire from those on both ends of the political spectrum. An article praising the exhibit as a positive transformation of hate into art, akin to making lemons into lemonade, has drawn 18 online comments so far.

Mattoon quotes many of the comments before drawing her conclusion:

Censorship is always a tricky topic. Most of us find it very easy to be against it, until we are confronted with something we find completely unacceptable. Then the conversation changes, and freedom of the press no longer applies to whatever it is we've decided is simply intolerable. Too bad that what is objectionable to one person might be the gospel of another.