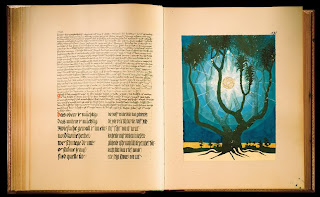 Sara Corbett wrote a long article for the New York Times Magazine about the publication of Carl Jung's Liber Novus, "New Book," better known as his "Red Book." The Times also provides a photographic sample of its handwritten pages including many full-page paintings by Jung of what Corbett calls

a kind of phantasmagoric morality play, driven by Jung’s own wish not just to chart a course out of the mangrove swamp of his inner world but also to take some of its riches with him.


Jung wrote and illustrated the book by hand over a sixteen-year period to record his dreams, active imaginations and self-induced hallucinations. These experiences became the basis for much of his later theorizing about myths, dreams, and the unconscious. 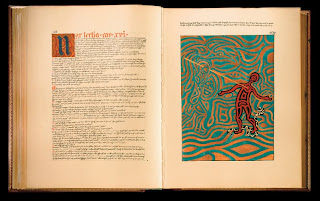 Jung never published the book and his family refused to publish it or even let very many people see it. Corbett's description of the book's history presents a detailed case study of the three dimensions of an important text and their social consequences.

The book itself is beautiful and imposing, as an iconic book should be:

There sunbathing under the [photographer's] lights, sat Carl Jung’s Red Book, splayed open to Page 37. One side of the open page showed an intricate mosaic painting of a giant holding an ax, surrounded by winged serpents and crocodiles. The other side was filled with a cramped German calligraphy that seemed at once controlled and also, just given the number of words on the page, created the impression of something written feverishly, cathartically.

... The Red Book had an undeniable beauty. Its colors seemed almost to pulse, its writing almost to crawl.

Here we find a paradigmatic description of an iconic book, even a relic book. Its iconic status derives from its impressive physical appearance and one-of-a-kind nature, but also from legendary stories about its origins (what Dori Parmenter calls "the myth of the book"). That iconic/relic status precedes and lays the basis for its inspirational reading (performance) and semantic significance.

[Jungian analyst Stephen Martin] added “It gives me goose bumps just thinking about it.” He had at that point yet to lay eyes on the book, but for him that made it all the more tantalizing. His hope was that the Red Book would “reinvigorate” Jungian psychology, or at the very least bring himself personally closer to Jung. “Will I understand it?” he said. “Probably not. Will it disappoint? Probably. Will it inspire? How could it not?” He paused a moment, seeming to think it through. “I want to be transformed by it,” he said finally. “That’s all there is.”

Jung himself seems to have recognized the iconic power of textuality. One of his clients recorded his advice on how to process her inner life:

“I should advise you to put it all down as beautifully as you can — in some beautifully bound book,” Jung instructed. “It will seem as if you were making the visions banal — but then you need to do that — then you are freed from the power of them. . . . Then when these things are in some precious book you can go to the book & turn over the pages & for you it will be your church — your cathedral — the silent places of your spirit where you will find renewal. If anyone tells you that it is morbid or neurotic and you listen to them — then you will lose your soul — for in that book is your soul.” 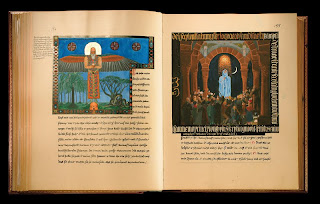 The first and chief semantic interpreter of the Red Book is its translator, Prof. Sonu Shamdasani who teaches at University College, London. In the classic tradition of textual experts of any tradition and era, he emphasizes semantic expertise:

He tends to be suspicious of interpretive thinking that’s not anchored by hard fact — and has, in fact, made a habit of attacking anybody he deems guilty of sloppy scholarship — and also maintains a generally unsentimental attitude toward Jung. Both of these qualities make him, at times, awkward company among both Jungians and Jungs.

... Having lived more or less alone with the book for almost a decade, Shamdasani — who is a lover of fine wine and the intricacies of jazz — these days has the slightly stunned aspect of someone who has only very recently found his way out of an enormous maze. When I visited him this summer in the book-stuffed duplex overlooking the heath, he was just adding his 1,051st footnote to the Red Book.


As with other relic books the world over, the iconic claims of private owners and public scholarship come into conflict:

The relationship between historians and the families of history’s luminaries is, almost by nature, one of mutual disenchantment. One side works to extract; the other to protect. One pushes; one pulls.

... To talk to Jung’s heirs is to understand that nearly four decades after his death, they continue to reel inside the psychic tornado Jung created during his lifetime, caught between the opposing forces of his admirers and critics and between their own filial loyalties and history’s pressing tendency to judge and rejudge its own playmakers. 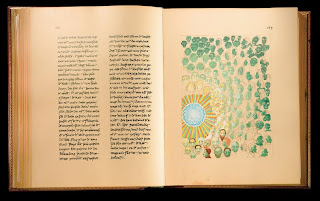 As a result of all of these factors, the Red Book's publication next month seems to arouse apprehension as much as excitement from everyone involved. Corbett observes that its publication

is a victory for someone, but it is too early yet to say for whom.

... The relationship between the Jungs and the people who are inspired by Jung is, almost by necessity, a complex symbiosis. The Red Book — which on one hand described Jung’s self-analysis and became the genesis for the Jungian method and on the other was just strange enough to possibly embarrass the family — held a certain electrical charge. Martin recognized the descendants’ quandary. “They own it, but they haven’t lived it,” he said, describing Jung’s legacy. “It’s very consternating for them because we all feel like we own it. ... This is the greatest psychic explorer of the 20th century, and this book tells the story of his inner life.”

... The Red Book is not an easy journey — it wasn’t for Jung, it wasn’t for his family, nor for Shamdasani, and neither will it be for readers. The book is bombastic, baroque and like so much else about Carl Jung, a willful oddity, synched with an antediluvian and mystical reality. The text is dense, often poetic, always strange. The art is arresting and also strange. Even today, its publication feels risky, like an exposure.


The book will be reproduced for mass consumption (as every icon should) early next month by W. W. Norton. The original Red Book will soon be on public exhibit (as every relic should) at the Rubin Museum of Art in New York.
Labels: exhibits, illuminated texts, manuscript, new research, preservation, relics, talismans, theory
Email ThisBlogThis!Share to TwitterShare to FacebookShare to Pinterest