Obama will use Lincoln Bible for inaugural oath 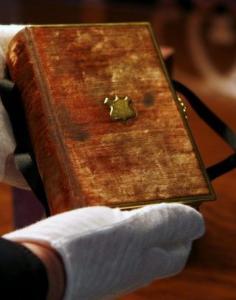 Following many other presidents who have used relic Bible's to take their oath of office, Barack Obama has chosen to use Lincoln's, according to Cox News Service:

President-elect Barack Obama will take the oath of office on the same Bible that Abraham Lincoln used for his swearing-in.

The burgundy velvet-bound volume known as the Lincoln Bible was purchased in 1861 by then-Supreme Court Clerk William Thomas Carroll for use in Abraham Lincoln's inauguration because the president-elect's family Bible was packed away and en route from Illinois to Washington.

The Lincoln Bible, now in the Library of Congress collection (as is Lincoln's family Bible), has not been used in a presidential inauguration since Lincoln took the oath in 1861.

The reader's comments on this article in the Boston Globe are unusually interesting. Ray Sollier takes issue with some common claims about the history of using Bibles in presidential oaths. I wish Ray would cite his sources ...
Labels: Bible, oaths, politics, relics
Email ThisBlogThis!Share to TwitterShare to FacebookShare to Pinterest

My question is, which Lincoln Bible will he use.

There seems to be more than one Lincoln Bible.

The news reports all insist that he will use Lincoln's inaugural Bible.