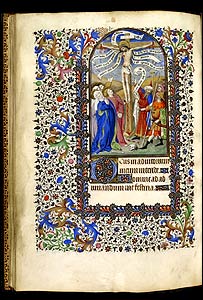 PhiloBiblos pointed out yesterday's BBC report that the British government imposed an export ban on the Wardington Hours (a 15th century illuminated Christian devotional text, a "Book of Hours") in order to give the British Library time to raise the money to match a German buyers' offer. This example illustrates how rare, museum-quality books usually function socially more like relics than like icons. That is, unlike iconic books like the Bible or Qur'an which are readily reproduced and whose distribution and export tend to be heartily encouraged, relic books are regarded as one-of-a-kind and often carry significant associations with particular places or countries. The textual and performative dimensions of relic books have ceased to be important; they are valued for their iconic dimension alone. And, like other kinds of relics, relic books are often divided into smaller parts to distribute their value: so the BBC article ends by noting that the Wardington Hours may have originally been part of "a complete Book of Hours now held in the Huntington Library in California."
Labels: illuminated texts, politics, relics, sales
Email ThisBlogThis!Share to TwitterShare to FacebookShare to Pinterest